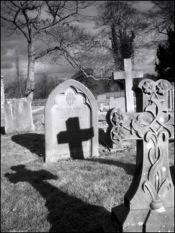 Here’s another sign that widgets and badges won’t do well in the new Facebook redesign. Nick O’Neill of All Facebook just posted a chart showing traffic to his “Bush Countdown Clock” widget, and boy, has it taken a tumble.

Granted, O’Neill’s widget is little more than a gag — it’s just a badge that users put in their profile to signal they’re literally counting the days until President Bush leaves office — so there’s a risk of making too big a deal out of one chart. But the more-than-60-percent drop in traffic that began on Sept. 11 (when O’Neill surmises a lot of users switched over to the redesign) is hard to ignore.

What happened? All the badges and widgets that previously lent color and personality to a user’s main profile have been shunted into a separate section called Boxes.

The Bush widget’s drop in traffic, and the shift towards a more feed- and news-focused Facebook that it implies, aren’t really a surprise. VentureBeat writer Eric Eldon has been writing about this since the redesign was announced; he argues that Facebook may have misjudged its audience by forcing a redesign that’s better-suited for serious Silicon Valley types rather than the more “fun” users who make up the bulk of Facebook’s audience. Well, it looks like the change is here, and Facebook widget-makers are in trouble.

Plenty of Facebook users aren’t happy about it either.