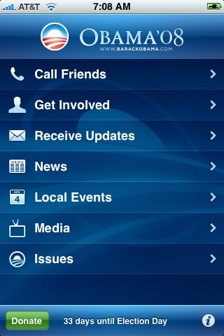 The campaign for Democratic presidential candidate Barack Obama is nothing if not savvy in the ways to woo the tech crowd. After months of relentless Internet presence (perhaps even to the point of a mini-backlash) the campaign has a new tool in its efforts to mobilize young techies — an iPhone application.

The best part is that it’s not some cheap gimmick, like a picture of Obama’s face that says “Yes we can” when you tap it. Instead, the app is all about organizing events, calling friends to get the message out, seeing where the candidate stands on the issues and getting the latest news on them. It’s actually quite brilliant. Every campaign should have one.

It also, quite prominently, allows you to donate to the campaign. After all, what would a 21st century campaign be without money? Lots of money. Perhaps to add some incentive, the donate button is placed right next to the countdown until Election Day.

The application also allows you to see how many calls have been made from within the app nationwide, according to CNET. You can see your personal statistics for getting the word out, too. This should motivate some enthusiastic supporters to make sure they’re doing all they can.

The app, which is called Obama ’08, is available as a free download in the App Store. Expect it to be a top download soon. No word on whether Republican candidate John McCain has a rival app built on Google’s Android platform — that may not be too smart as the first of those devices is only coming a couple of weeks before the election.