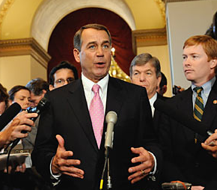 The House has just passed the economic bailout plan, according to CNN. This paves the way for the Treasury Secretary to spend as much as $700 billion to buy up troubled banking assets and jump start the economy.

The plan now heads to President Bush for his signature. The President has given every indication that he would sign the bill as soon as it got to him.

The House failed to pass the bailout on Monday, and both the Democrats and Republicans pointed fingers at one another as to why they couldn’t get it passed. This failure led to the largest one-day point drop in the history of the Dow.

In the end, quite a few House members on both sides had to switch their votes to ensure passage. The bill was also modified to include things such as tax break extenders and an increase to the FDIC deposit insurance limit. Those were added to the bill in the Senate, which passed the legislation on Wednesday.

Update: Looks like we were a little too quick with the news — now the stock market has plunged into negative territory as word of the passing spread through Wall Street. At 1 PM EST the Dow was nearing the 10,800 mark — now it’s at 10,462. It has plummeted over 300 points in just about an hour or so.

Update 2: And now the market is rallying again. The Dow is up over 60 points to surge past 10,500 again. Investors beware.

Update 3: And now it’s plummeting again. The Dow is down over 140 points (over 1.3 percent). These updates really serve no purpose other than to highlight how volatile it’s been today. As we near the markets’ close, it’s looking like we will have seen a full 500-point swing on the Dow in just a few hours — which was prolonged by several rallies as you can see in the chart below. 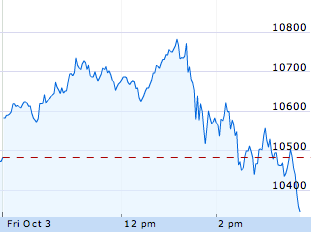