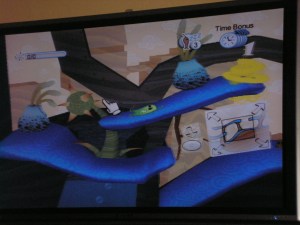 Real Networks, long-time maker of casual PC games, is moving into the game console arena for the first time with a new downloadable title for Nintendo’s Wii.

Real Networks announced today “Boingz,” a game with cute characters that you can move around the screen as if you were shooting rubber bands. It is a WiiWare title, meaning you can download it to your Wii via Nintendo’s online store. The game was developed by independent developer NinjaBee (a division of Wahoo Studios) for Real Networks.

“This lets us broaden our horizons,” said Frank Rogan of Real Networks. “This is just the first console title.”

Rogan said that Real Networks will make other games as well, including a retail Wii console title and two Nintendo DS games.

A downloadable Wii title is not a big departure for Real Networks, which makes downloadable games for the PC. Real Networks’ RealArcade is one of the most popular casual game destinations on the web. But it shows that casual game companies can cross from one platform to another when the content makes sense without too much difficulty. It also shows that Nintendo’s WiiWare platform has become a viable business alternative for third party game publishers and developers.

Marc Franklin, a Nintendo spokesman, said that more than 33 WiiWare games have become available since the debut of the online store platform last year. This batch includes a number of games made by small independent game shops. One of the biggest hits is indie game developer XGen Studios‘ “Defend Your Castle.” Nintendo’s WiiWare platform competes with Sony’s PlayStation Network for the PlayStation 3 and Microsoft’s Xbox Live Arcade on the Xbox 360.