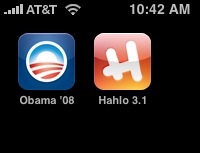 With the launch of the Apple’s App Store, the once all-powerful web app has lost a lot of its value on the iPhone and iPod touch. There are still plenty of good apps out there — such as the Twitter client Hahlo, FriendFeed and several of the Google web apps — but they’re confined to running within the Safari web browser. That makes them a lot less sexy than native apps. But thanks to a recent update to the iPhone software, web apps can get their sexy back with a few small code tweaks.

Specifically, it looks like the iPhone 2.1 software included an update that allows web applications to run in full-screen mode on the iPhone or iPod touch, an AppleInsider reader has noticed. This would make many of the web apps almost indistinguishable from native apps because there would be no Safari container around them.

For this to work, users would have to save the app to their home screen (which you can do with two clicks while using any web app in Safari). Launching this app from its newly created icon on your screen would then open it up without bringing up elements like the Safari toolbar — though it would still be Safari running the app.

Many native applications currently have such functionality — running the web without loading the full version of Safari. This allows for a more seamless transition from app to web within applications.