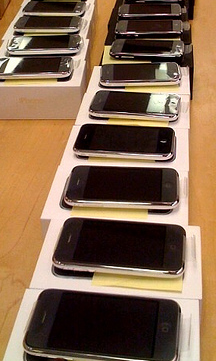 You know the stock market’s bad when Apple has a flurry of good iPhone news and its stock is still down over 8 percent in trading. That’s the situation today.

The good news is that Apple has apparently already sold over 10 million iPhones this year. It has stated numerous times that 10 million was the goal for all of 2008, and it appears to have hit that goal a full three months early, if some numbers gathered by the blog Bullish Cross are correct — and they seem to be.

By tracking International Mobile Equipment Identity (IMEI) numbers, Bullish Cross has figured out that Apple has made just about 9.2 million iPhone 3Gs thus far. Even by conservative estimates, Apple has likely sold something close to 7.6 million units of the device since its launch in June. That, when added to the 2.42 million first generation iPhones sold this year before the 3G’s release, means Apple is past the 10 million mark, as Apple 2.0 points out.

Hitting this number so early is great news for Apple. Many analysts thought it might be a hard goal to reach when Apple first stated it, but then Apple unveiled its iPhone 3G and global expansion plans. So why is the stock tanking today?

The stock is currently down around 8 points, down over 8 percent. What’s more amazing is that it continues to fall well below the $100-a-share mark when just weeks ago it was nearly $180-a-share.

It’s hard to say for sure why this is, but in case you haven’t noticed, the overall market is bad right now — really bad. There are smaller newsworthy stories going against Apple out there, such as the company losing its bid to dismiss an iPhone monopoly suit, but that news has been out since Friday and isn’t likely to have a huge impact.

We’re also hearing that the device is failing to ignite much interest in Russia, where it went on sale for the first time on October 2. Only 2,500 to 3,000 iPhone 3Gs have been sold since its launch in the country, a source told us. But it’s hard to know that for sure. It’s certainly not impossible though seeing as the device is nearly $1,000 in Russia. Note: The Russian stock market started tanking well before the phone went on sale.

Still, there are other very positive stories about the iPhone today. The device has become the second best-selling mobile handset in the U.S., just behind the Motorola Razr 3 (which is of course much cheaper as it’s not a smartphone), according to new numbers from NPD. The report goes on to say that some 30 percent of iPhone 3G buyers dumped their existing mobile carriers to switch to AT&T to get the device. That’s huge.

And still the stock lingers around $88-a-share. A price it hasn’t seen since early 2007. That was before the iPhone even existed. It seems nothing can rouse the market these days. Not even good news about the device known affectionately as the “JesusPhone.”

Update: After bottoming-out with a new 52-week low of $87.54-a-share, the stock rallied to actually close up $1.07 (1.10 percent) for the day. It appears investors came to their senses and weren’t really sure why the stock was down 8 percent on mostly positive news either — or at the very least they saw a huge bargain in getting a stock that was at $180-a-share in August, for half of that.