Most of the heavily-funded solar panel makers out there have let the public know what they’re working on, if not all the specifics of their technology. So it’s somewhat remarkable that Solyndra has managed to stay stealthy for over three years, all while accumulating over half a billion dollars in funding.

Some details have emerged, to be sure. But the company has now opened up for the first time to give hard details on its product, a panel for commercial rooftop installation that it says drastically undercuts its competitors in price. 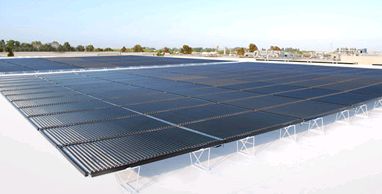 Solyndra is currently in the expansion stage for one large plant to make the panels and in planning stages for a second plant, both in the company’s hometown of Fremont, Calif., with a planned total capacity of over 500 megawatts. But its panels aren’t exactly the industry standard; where almost all others on the market look like a flat sheet of dark material, Solyndra’s panels resemble a row of long fluorescent light tubes, each an inch wide and an inch apart.

What’s inside the tubes is what makes the difference. Solyndra makes thin-film CIGS, a chemical composition similar to big startups like Miasole and Nanosolar. However, instead of laying it flat, it wraps it into the inside of the tube. Optics around that inner core then help focus about half again more sunlight onto the core than it would otherwise receive.

The design allows Solyndra to lay its panels flat against a rooftop, where just about every other company has to tilt its panels to receive sunlight at the best angle. That might seem like a niggling difference, but it’s actually a major change. Without all the racks and careful alignment required of a regular solar installation, Solyndra can take advantage of far more space on a single roof.

Another important difference is that the gaps in Solyndra’s panels and their flat alignment to the roof make it far less likely that strong winds will damage them, which allows for somewhat less rigorous precautions against storms. In all, the differences cut the cost of installation by about half.

Considering that installation is around half the total cost of a Solyndra solar deployment, that’s a major difference. A $400,000 commercial installation on a big box store, for example, might only be $300,000 with Solyndra, and it would allow for use of more of the rooftop.

That all helps explain how Solyndra has lined up over $600 million in funding, according to CEO Chris Gronet, and a $1.2 billion order log. The company began testing out its panels earlier this year, having finished development. Now, “the whole focus of the company is ramping production,” says Gronet.

However, all may not be as perfect as Solyndra is making it out to be. Also emerging this evening is a report by Greentech Media that a $350 million funding round Solyndra was seeking didn’t attract enough attention and remains incomplete.

Although I didn’t ask Gronet specifically about that round, he did tell me that if Solyndra can’t tap into more equity funding, it will have access to a Department of Energy guaranteed loan program, for which it was one of eight finalists. The company could also try to take out bank or private equity loans to continue scaling up, although this is likely a challenging time to do so.