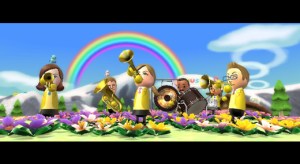 Nintendo showed off both its strengths and weaknesses as a game company last week in San Francisco as it debuted its lineup for fall 2008 and games for next year.

Over two days, I saw games that I liked, including the wonderfully creative “Wii Music,” and games that I hated, like Activision Blizzard‘s “Call of Duty: World at War” for the Wii. And then there were weird games, like “Rayman Raving Rabbids TV Party,” which required me to steer with my butt. Here are my first impressions, based on spending a small amount of time with these games hands-on.

Shigeru Miyamoto, Nintendo’s top game designer, showed off a version of Wii Music for the first time in the spring of 2006, conducting a faux orchestra using only hand gestures. The actual game debuts on Oct. 20, and will likely reestablish Nintendo as the king of innovation.

Like “Guitar Hero” and “Rock Band,” Wii Music basically lets you pretend you’re an air guitarist — with a little more diversity. You can strum a virtual violin by holding the Wii Nunchuk (an attachment to the Wii remote) up in the air as if you were cradling the neck of a violin. When you move your other hand (holding the regular remote) back and forth, the character on the screen mimics your movements and violin sounds emanate from the TV. You can do the same for drums, guitars, saxophones — a total of 60 instruments. The movements you make produce the expected sounds. 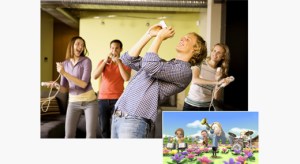 Wii Music is one of those games that doesn’t really keep score, so there’s no way to lose. That’s a big contrast to Guitar Hero, where you can “fail out” of a song if you don’t hit the right notes to match the playback of a song. The idea behind Nintendo’s game is to get everyone involved in music, from the youngest to the oldest, from the musically-inclined to those who have never picked up an instrument before.

I’m in that second camp. Never played an instrument in my life — at least not seriously. But I had no trouble jamming with the Nunchuk in my left hand, the Wii remote in my right, and the Wii Balance Board under my feet. I started with the snare drums and just started banging away. I tapped with my feet to play the bass drum and the hi-hat cymbal. It didn’t sound good, but I had fun just cutting loose and making a lot of noise at the same time.

I played more songs on a console connected to a big screen in a room with good acoustics. You can choose from among 50 different well known songs and a dozen or so different venues, including a plaza or outerspace. I tried the saxophone by holding the Wii remote length wise. I bent low to make low sounds and I pulled up high to make high notes. It was cool to do that without any other Wii accessories needed, but the fact that you can use the add-ons to play so many instruments says something about the versatility of the Wii.

As many as four can play, and you can record videos of your songs and share them with someone else. Unfortunately, you can’t live jam with someone over the Internet. However, you can share a track with them and they can add an instrumental performance to it.

This title will have mass appeal, just like the smash hit Wii Sports, because anybody can play it. It is a title for the rest of us. You can use it as light social entertainment, get your kids excited about playing an instrument, or play like a pro with endless variation. 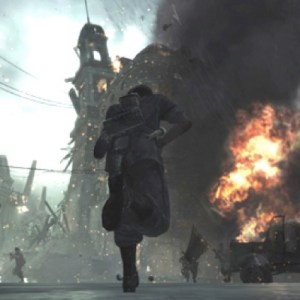 Lest you think I’ve become a Wii fan boy, let me say how disappointing it was to try out Call of Duty: World at War, coming out next year on the Wii. The problem with this game is the poor accuracy of the Wii remote when it comes to pointing and shooting at something on the screen.

The Wii just has too many problems to do this kind of game well. You point it at the screen but it doesn’t immediately register a connection. You have to pause and wait for the Wii to recognize what you’re doing. Then it’s still very hard to hold the Wii remote steady on your target. It’s also too hard to use the Nunchuk to change the direction you’re facing without completely losing your frame of reference.

I tried to ride shotgun with another player who had a flamethrower in the World War II game. I had a machine gun, but I couldn’t hit anything without stopping and trying my hardest to draw a bead with the shaky cross-hairs. And my cursor would disappear from the screen altogether at intervals, making it hard to shoot with any consistency. You can adjust the various settings to make the aiming less or more accurate. But the bottom line is that it’s harder to learn how to play a shooting game with the Wii than with a standard game controller on the Xbox 360. And believe me, it’s not intuitive to learn how to use a game controller with the Xbox 360. The Wii should be even more intuitive, but it’s not.

In a way, I’ve been spoiled by better technology that I’ve seen in development. In particular, Los Gatos, Calif.-based Sixense makes a much more accurate controller/aiming device using magnetic fields. With this technology, you can pinpoint exactly where you’d like to place the cross-hairs without worrying about your hands shaking. It could be introduced next year, but cost remains the issue. Still, with better options on the horizon, I’m just not satisfied with the Wii as it is.

Thus, shooting games are still the domain of the Xbox 360, the PlayStation 3 and the PC. We’ll see if Nintendo can pull it together in future releases. It’s trying to do so with “The Conduit,” another shooting game that debuted for the press last week. In this game, aliens take over Washington D.C. and the player has to take the city back. The shooting accuracy is a little better, but that’s because it doesn’t take much aim or many shots to take out the enemies. Again, the game has to compensate for the Wii. 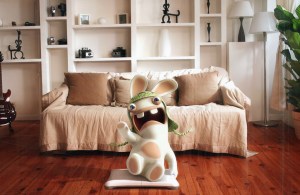 Accuracy of control was also a problem in Ubisoft‘s upcoming Wii game, “Rayman Raving Rabbids TV Party.” I tried it out just once. You sit on the Wii Balance Board and use your butt to steer a snowboard down a mountain and through a series of gates (you’re actually riding on the back of a wildebeast). While the idea is cute and even innovative, it just wasn’t very accurate. No matter how hard I tried, I just kept missing gates.

The Wii does OK on other kinds of games where pinpoint accuracy isn’t important. For instance, the “Punch-Out” game coming out next year is a good boxing game that makes use of the Wii’s accelerometers, which measure the momentum of the remotes. It’s accurate enough to detect your swings — or at least it seemed that way in the demo.

I know, I know. There’s a pattern here. I’m not good at aiming. But we’re talking about games that really ought to be accessible to broader audiences. Here I am, a hardcore gamer, and I can’t shoot or steer in these games. I blame that on the design and the console, not myself. So here’s my constructive feedback for Nintendo: The Wii introduced us to a wonderful new user interface with the Wii remote in 2006. Now it’s time to finish what the company started and come up with more accurate control technologies. I don’t want to wait for an even newer, better console. I want that functionality now.

To conclude, Nintendo still has some of the most creative games out there and one of the most innovative consoles ever. But it really should do more to lock up hardcore gamers.