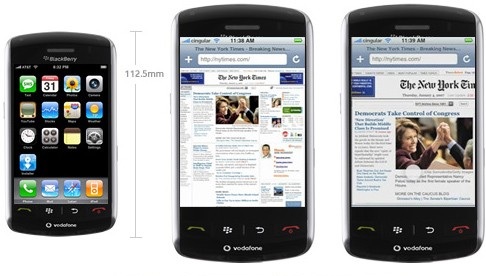 It’s pretty clear that Research In Motion’s (RIM) new BlackBerry Storm smartphone was designed with another phone in mind: Apple’s iPhone. What we didn’t expect was that RIM would be so blatantly obvious about it.

For several hours tonight, Vodafone (the European distributor of the device) had a Storm promo page showing pictures of the device actually running Apple’s version of OS X that powers the iPhone. Ouch.

The pictures have been removed from the site already, but the gadget blog Engadget was able to capture and rightfully mock RIM before they were removed. One of the pictures shows the Storm displaying the iPhone main screen. Interestingly enough, it looks to be the main screen on a jailbroken iPhone — that is, one tinkered with to allow it to run unauthorized third-party applications.

Two other images show the Storm running the mobile version of the Safari web browser. The only problem? The iPhone is the only mobile device able to run Safari.

The Apple-infused pictures have been replaced by pictures of the actual BlackBerry Storm interface — which looks fairly nice in its own right. The device is the first BlackBerry to completely do away with the physical keyboard in favor of the touchscreen-only approach. But those who hate the fact that the iPhone has no keyboard may be interested in the Storm’s touchscreen, which apparently depresses and gives back a “click” to simulate actually touching a keypad, according to GigaOM.

Don’t be surprised if the next iteration of the iPhone has a screen with some sort of tactile feedback to let users orient their fingers on screen and alert them with a small zap when they’re typing.

Will this BlackBerry Storm touchscreen feedback be enough to stop people from choosing the hottest smartphone on the market, the iPhone 3G, rather than a BlackBerry? Probably not, but the device has some other interesting elements including its own store for application downloads, dubbed — get ready — Application Center.

The BlackBerry Storm will also have its own software to allow it to sync with computers — including Macs, according to AppleInsider. The iPhone’s ease in syncing with iTunes is another strong suit of the device.

The BlackBerry Storm is expected to be released next month through both Verizon and Vodafone.