Twitter fever is catching on. Goodreads is announcing today that it is launching a Twitter-like feature on its book reader’s social network. With it, members can list the books they’re currently reading. They can also say what page they’re on and make a comment up to 140 characters. 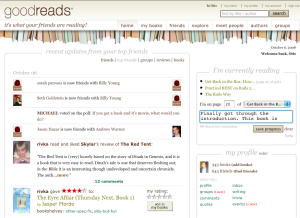 Otis Chandler, founder of the site, said that the new feature allows people to express a current thought, such as, “Oh no! The main character is in trouble with the bad guy.” (Or perhaps something more elevated). Like Twitter or the Facebook status update line, you can then check out a whole series of posts that your friends have made. You can absorb a running commentary on what people think while they’re reading.

“It makes reading a more social process,” he said.

Of course, if people spend all of their time writing and reading status updates, they’ll probably get less reading done. I put this question to Chandler, who responded, “The more people are thinking about and talking about books, the more they’ll read. And if their activities are public, then it creates social pressure on their friends to read. I love it.”

Most people rate books on the site. The average is about 100 or so (I rated more than 500!). But relatively few avail themselves of the opportunity to write a full-length text review of the book. While writing reviews is a good way to get engaged with the Goodreads community (which has 7,000 book clubs), it just doesn’t happen as often. This new feature is like adding virtual notes in the margins of the book. 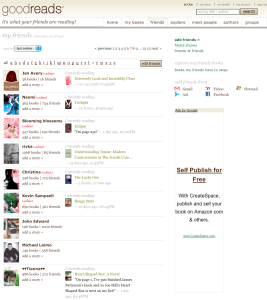 Chandler turned the feature on a few days ago and there are already thousands of status updates. The site has more than 1.5 million registered users who have rated more than 30 million books. When I wrote about them in August, the number was 1.3 million users who’d rated 25 million books.

Certainly, there are others jumping on the “micro-blogging” trend, inspired by Twitter. Just a couple of days ago, Raptr, the social network for gamers, added support for the Twitter-like Ping.fm, the service that broadcasts personal updates to multiple social networks.

Goodreads has four employees and is considering raising money in the next year. It raised an angel round last year. It has competition from LibraryThing and Shelfari, which was recently bought by Amazon.com.