Online music recommendation engines are nothing new. Pandora is one of the most high profile, but services that do other things such as Last.fm, Imeem and now even iTunes, all offer this functionality in some capacity. Mufin hopes to stand out by doing things a bit differently: Analyzing only the music.

Most other recommendation engines using social aspects to determine what music should be recommended, Mufin head of marketing Petar Djekic explained. For example, if you like the band Pearl Jam, most services will look for other users who like Pearl Jam and come back with similar artists or tracks that those people like as well. This would likely return music of a similar genre or type — say grunge music from the 1990s.

Mufin, on the other hand, actually breaks down and analyzes the music itself. Using what it calls “advanced audio fingerprinting technology,” the service looks at over 40 characteristics of a song, including things like tempo, instruments, sound density and rhythm structure.

A search of any artist or song will immediately bring back tracks with similar characteristics. These can be artists that are completely unknown to all but a select few fans. That can be powerful for discovering actual new music, rather than just another semi-popular band that you haven’t heard of before. Mufin’s database already contains millions of tracks with new ones being added everyday, Djekic said.

Testing it out, the service gave recommendations that seemed accurate. But Mufin’s strength — that it just analyzes the music — may also be something of a weakness. Usually, people are good at filtering out good music from bad music, but Mufin will probably have trouble with this. Good and bad songs can have very similar characteristics, so there may be something else small that separates them. 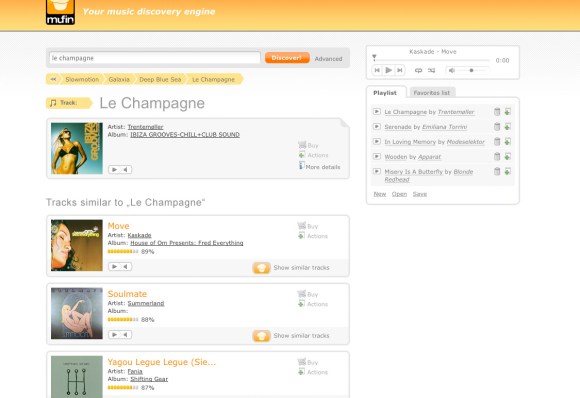 Another weakness is that Mufin doesn’t actually stream full tracks on its site. It simply gives you a preview and then directs you somewhere else (Amazon or iTunes) to buy the music. Djekic said that he’d like Mufin to team up with another site that has full-track streaming capabilities, but that it was probably too tricky for Mufin to do at this point given all the legal ramifications.

Djekic says Pandora is the most similar service, but he argues that Mufin’s individual track technology is better equipped for recommendations. He also notes that Mufin can work offline if users download the company’s desktop software (which is currently PC-only). Unlike iTunes’ new Genius feature, Mufin’s desktop software doesn’t even need to be connected to the Internet to work. But it could take several hours to scan your local music collection depending on how large it is.

Mufin also works as a widget (with the site’s full functionality) on the social network MySpace, and will work on Facebook soon.

The service is launching today in private beta testing and we have invites for 20 VentureBeat readers. Simply click here to sign up. The plan is to launch a public beta in November with some additional features, Djekic said.

Mufin is located in Berlin, Germany and is a wholly owned subsidiary of the MAGIX AG.