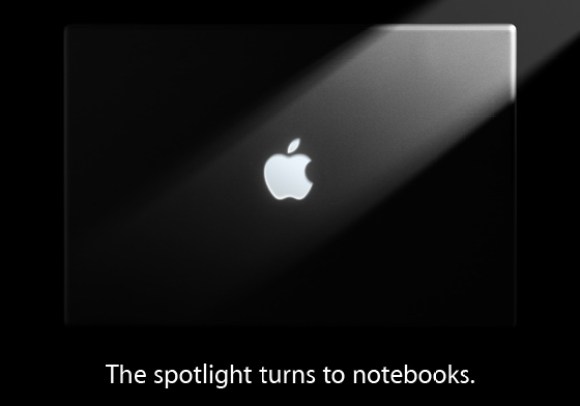 Well, Apple sure took their time getting those invites out. As has been speculated for several weeks now, Apple is in fact holding an event on October 14 to unveil its new line of MacBook computers. The invite, which simply reads: “The spotlight turns to notebooks,” is expected to showcase a revamp of Apple entire line of portable computers.

The invite shows what appears to be a dark metallic notebook shrouded in shadow. Dare I say, it’s made from aluminum? There has been a lot of speculation that the real revolution in these new notebook is the process by which they are made. Apple may be taking total charge of production of the MacBooks (rather than outsourcing it to companies in China and Taiwan) and building them using a new process involving lasers and water jets that carve a case out of a brick of aluminum.

Also, the fact that simply one notebook is shown on the invitation may or may not point to a unification of the entire line to a single, all-aluminum look, as has been rumored.

Yesterday, several photos started popping up online which were said to be of the new MacBook frames. It now appears that at least some of those images are the real deal, sources tell AppleInsider. The bigger rumor is that Apple would unveil price points for the new notebooks starting at $799 — that is still very much a rumor.

Naturally, a few sites (including us) said yesterday that Apple may not unveil the device on October 14 since that was less than a week away. Only once in the history of its events has Apple sent out invites with less than a week to spare. In 2005, Apple had an event that it alerted the media to only 5 days before (the same amount of time as today’s heads-up), but that was for some relatively unexciting innovations in its high-end Pro lines of a number of products. If this new event is as revolutionary as the hype is making it out to be, everyone will want to be there.

Apple caught some flack last month for allegedly telling members of the New York media to fly out to San Francisco for its event. The event, which yielded new iPods, was perceived as underwhelming by some — many of whom were hoping for new notebooks as well. Today, Apple was kind enough to give those same East Coast media members 5 days to book their flights back out to San Francisco.

Luckily, we’re already here, but God forbid we had other plans or something.