There’s a lot to like about Zoho Mail, the next step in Zoho’s rapid roll-out of a broad range of business applications . But for a non-Zoho user, there’s one thing that’s kind of galling: You can access your Zoho Mail through integration with browser extension Google Gears. It’s a smart, useful feature, and that only makes it more annoying that Google hasn’t provided similar offline functionality for Gmail.

Back in July, there were rumors that Google would use Gears to create desktop versions of Gmail and Google Calendar. (Gears’ big selling point is its ability to bring web applications offline, although it has much more potential than that.) Well, those six weeks have come and gone. In the meantime, we had a brief-but-terrifying Gmail outage, making the need for Gears integration even more apparent.

It would be foolish to think that Zoho poses any immediate threat to Gmail. Google is probably taking its sweet time to get everything just right on the Gmail/Gears integration, as ReadWriteWeb speculates. And that makes sense, since the point isn’t just to pull emails from your Gmail account onto your desktop — you can do that already with applications like Mozilla’s Thunderbird and Microsoft Outlook — but to bring Gmail’s rich features offline. Still, the fact that Zoho used Google’s own technology to bring this functionality to Zoho Mail makes the wait particularly exasperating. 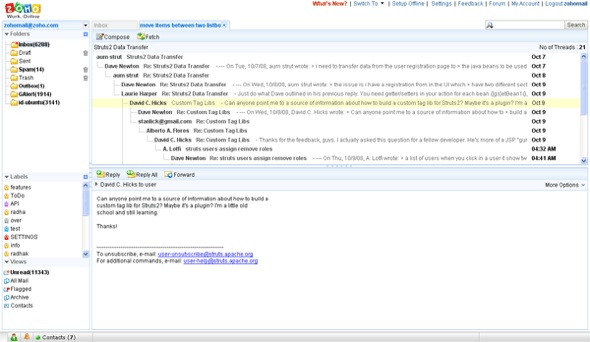 Zoho evangelist Raju Vegesna has a quick overview of the application’s features, and they sound pretty cool. For one thing, it gives you the option of seeing each email in the order it arrives, like Outlook (and most other desktop email tools), or to see them grouped into conversation threads, like Gmail. There’s also a mobile version Zoho Mail website that’s customized for the iPhone. Zoho Mail is also integrated with Zoho Chat. Finally, Zoho Mail is free, and, as with other Zoho applications, you can also use it with your Google or Yahoo accounts.

The Pleasanton, Calif.-based company is owned by AdventNet.