I’ll be honest. When we got a tip that the developers who run the iPhone application development company known as Tap Tap Tap had a falling out and were splitting up, I had no idea what Tap Tap Tap was. I still really don’t, but that doesn’t matter. There are dozens of these developer teams out there now building apps for Apple’s App Store. What matters is a pretty public, fairly messy and probably over-dramatic breakup, all over iPhone application development.

On the brink of expansion, the two founding developers of Tap Tap Tap have instead decided to end their professional relationship, developer John Casasanta writes on the Tap Tap Tap blog. He and fellow developer Sophia Teutschler, apparently could not make iPhone apps “without stepping on each other’s toes,” John notes.

So the two will split ways — and will split up the app children of their brief developer marriage.

Sofia gets custody of Tipulator, a well-reviewed tipping application, Groceries, which I can’t find in the App Store but I’d guess makes a list of groceries you wish to buy, and an in-progress app called I’m Here. She will continue to raise these apps under the new moniker Sophiestication (cute). 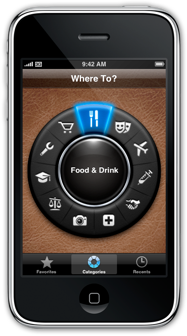 From there things get a bit messy. It would seem the real reason behind John’s post is to try and sell Tap Tap Tap’s “big hit” application, Where To. I have actually heard of Where To, but I cannot use it because it’s restricted for some reason to only iPhone owners outside of the U.S. Oh well, from the looks of it, it’s another app that tells you where places of interest are in relation to current location.

John says the decision was between euthanizing the app or putting it up for adoption. Not surprisingly, the two decided on the latter as this adoption will be run auction-style. “We’ll be selling it all to the highest bidder and Sophia and I will be splitting the amount we get for it,” John says. Details are forthcoming on the blog.

And like any decent people putting their baby up for adoption (even an auction-based one I suppose), John and Sophia have some standards. “I simply don’t have time for questions from “tire-kickers” so you’re going to have to prove that you’re serious if you want to bid on it. Be prepared to put up a deposit in escrow to qualify yourself as a potential buyer,” John writes.

Escrow? This child was clearly loved.

It’s a sad tale of a falling-out, a split-up and an agreement that will likely end up in a development team’s best app being sold. It was the iPhone that drove this once happy couple apart.

So don’t believe everything you read about iPhone app developers making tons of money and life being great. App development has a dark side as well — especially when multiple egos are involved.

The strong, silent Sophia weighs in via a comment on John’s post: “The last weeks were terrible but I’m confident that things will change for the better for all of us,” she writes. Hope remains. There’s always the Android platform.