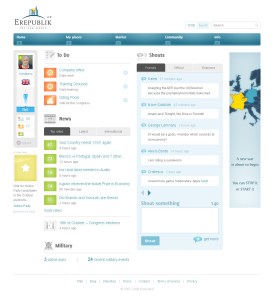 eRepublik Labs is betting that strategy game fans will jump at the chance to join together with friends to conquer the world. The Dublin, Ireland-based company is formally launching its “eRepublik” game, where thousands of players can set up their own countries, run for high office, start companies, and wage war on their rivals.

The massively multiplayer online game has been in beta testing since last year and has 35,000 active daily “citizens” playing in a “mirror world,” or one just like our own. Yes, you can become an oil company baron or see what it’s like to be George Bush.

In contrast to market leader “World of Warcraft,” eRepublik has simple two-dimensional graphics. When you log into it, it’s like looking at the home page for a social networking site. The mostly text-based screen shows you recent news from diffferent newspapers in the game world and the latest updates for your game character.

Alexis Bonte, chief executive, said in an interview that the game is a lot like “Civilization,” the turn-based strategy game known for its cerebral, chess-like style. You make some moves to expand your business or military prowess and then see what happens. But Bonte said that people who have only 15 minutes a day to play can fully participate in eRepublik. The game, while complicated, is thus considered “casual” in its appeal, more like a snack than a full meal. 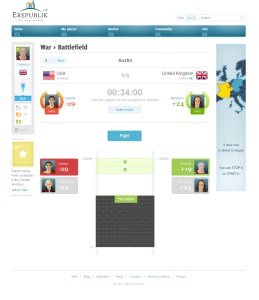 “I was addicted to Civilization,” he said. “But I was also married and had a family. It was either play Civ or get a divorce. I needed a game that you could play 15 minutes a day.”

About 90 percent of the content in the game has been created by players, including thousands of newspapers, hundreds of political parties, and 3,700 companies. It’s a lot like the real world, played on a real world map. If your country has been taken over by someone else, you can wage a resistance war against the conqueror. You can fight for raw materials, deal with economic embargoes, and engage in entangling alliances. About 120,000 people have registered to play in 10 months, even with limited marketing. The active members play about 14 minutes a day, resulting in a million page views a month. The average player is 26 years old. The target audience of strategy players depends more about the mechanics of how the game is played, rather than graphics quality. Over time, however, eRepublik will improve the graphics.

The company has 21 employees, including a team in Bucharest, Romania, and another in Madrid, Spain. Bonte sold a European Internet travel company, Lastminute.com, to Sabre for $1 billion in 2005. He  bootstrapped the company himself. This summer, eRepublik Labs received €750,000 in funding from AGF Private Equity and several business angels.

In the game, you can wage war via Twitter-like updates. In a battle, the game asks you a trivia question. If you can answer it correctly, you give your troops an edge in the fight. When you first join, you have to work for someone else, as a worker or a soldier. You get paid for your efforts and work your way up. While that may sound boring, Bonte said it’s easy to make progress. The company makes money when you short circuit the process and pay to get more skills or property. Players also have to pay for data storage, which amounts to about 10 euros for six months of storage. 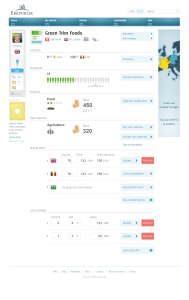 In the game, the U.S. recently declared war on Canada. The Canadians enlisted the help of the Spanish, who sent mercenaries to fight the U.S., which started losing the war. The U.S. had to bribe soldiers, sue for peace and pay damages. Canada’s population quadrupled during the war. The influx of new players was due to what Bonte called “emotional virality,” or coming to the defense of your country when it’s attacked.

Bonte’s goal is to get 100,000 citizens by the end of the year and a million by the end of next year. The Civilization franchise remains a competitor, but closer competitors include short-form strategy games such as those created by Game Forge in Germany.

Bonte said the company is raising a new round of money. He acknowledged it’s a hard time, but he expects his entrepreneurial background and past success to help. He noted that games are recession-proof.

“Games are all about escapism, like the cinema, and that will help us get through the tough economy,” he said.