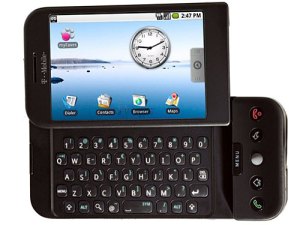 I got a close-up view of an Android phone today. It was an HTC phone, dubbed the T-Mobile G1. It is the first phone that runs Google’s Android software, and it is probably going to give the iPhone a run for its money as the coolest gadget of the season.

T-Mobile has already signed up 1.5 million people who want to buy this phone, sight unseen. It goes on sale on Oct. 22. The pre-orders suggest that Android has the same kind of sex appeal as the iPhone, which sold a million units at its debut. [Update: readers are quite skeptical of this number, and T-Mobile isn’t saying what it is]. It’s amazing that so many people want to buy this without feeling it in their own hands first. The promise from Google to consumers: You can make it your own, and you can have a full web experience.

You can check out the features online. But holding one is better. The first thing you notice is the touchscreen, which is 3.2 inches long. It’s smaller than the 4-inch iPhone touchscreen, so there isn’t as much real estate to play with. You can orient the phone either vertically or horizontally, just like an iPhone.

When you tap the screen, it lights up to reveal a series of dots connected by lines. You make an “L” pattern with your finger, connecting the dots, to activate the phone. This is similar to the iPhone feature that keeps you from activating the phone while it’s in your pocket. You can also make a circular motion to lock the G1 when you’re putting it back in your pocket. No more calling people by accident from your pocket.

You can embed your own wallpaper on the home screen. And you can stick a bunch of icons onto that main screen for the apps or functions that you use frequently. You can get single-click access to Google Maps, including features such as satellite maps, traffic conditions, and street views. You can also tap once to get Gmail, YouTube, Google Calendar, and Google Talk (for chat).

If you run out of space on the home screen, you can slide your finger across the page to scroll to another part of the screen. You can scroll to the left or to the right; when the scrolling stops, you can find more real estate on the home page for more icons. It’s like the second page on the iPhone home screen. It makes you think that the screen is actually showing you just a small section of the main page.

Google Search will fetch you results just like the desktop version. But you can get the results prioritized based on your location, so that the search results will show you what is closest to your current position. That makes finding things like a restaurant easier. HTC has also included a MyFaves icon, which is the T-Mobile interface for speed-dialing your friends or mother. 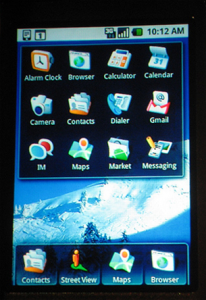 Beyond the basic Google apps, you can add your own. You can visit the Marketplace for Android apps and buy whatever you want. The apps are sorted by alphabetical order or by popularity. You can search for things and buy them with a couple of taps. They download to the phone and you can stick the icons on the home page.

One of the amusing apps was a “level” app, which makes use of the accelerometer in the phone. It basically can tell which way the ground is, no matter where you turn the phone. So this cute app is just like a carpenter’s level, with a bar and a virtual bubble inside some virtual liquid. If you hold the phone level with the ground, you can move the bubble toward the center of the bar. You can do this vertically or horizontally. And you can also hold it flat, with the display facing the sky. Both the horizontal and vertical bars appear and you can level the bubbles on both of them so that the phone becomes exactly level.

Text-messaging on this phone is far, far, far better than on the iPhone. With the iPhone, there is no keyboard except the virtual one on the touchscreen. While the screen is large, Apple chose to make the keys for the letters very small. The iPhone also has no force feedback in the screen that could tell you if you struck a key when you tap the keyboard. I can’t type accurately with it. I think it is the iPhone’s greatest failing.

But the HTC G1 has a slide-out QWERTY keyboard on a hinge with a slight spring to it. You can snap it open. The keys themselves are raised in five rows. There is plenty of space in between the raised letters, so people with relatively big fingers shouldn’t have a problem hitting the right keys. It takes some effort to press a key, so you’re not really going to be hitting the wrong keys by accident. You’re likely to type on this keyboard by cradling the phone with your fingers and tapping the keys with your thumbs;the keyboard itself seems too small to try to do touch-typing with your fingers all bunched over the ASDF JKL: keys. But it’s still a big improvement because it is so tactile.

In contrast to some other slide phones (like the Helio Ocean, pictured left), you can’t slide this phone vertically to reveal a separate numeric keyboard. If you want to dial with the G1, you have to use the touchscreen keyboard.

Text messages show up on the screen, with one line showing from each message. You can peak at five or so subject lines at the same time. But the cool thing is that the messages are threaded. That is, you can see the reply directly underneath a text message so that you know which messages belong together.

It has a Webkit web browser, the same as the iPhone. There wasn’t anything to write home about there. Among the other features: Video playback, music playback (with a gigabyte of storage), a three-megapixel camera with auto focus, as well as 3G network and Wi-Fi access. It also has a built-in microphone and speaker, GPS navigation, 350 minutes of talk time and 402 hours of standby time. The phone costs $179 and data plans start with a limited version at $25 a month and unlimited at $35 a month.

All in all, it’s a good phone. It’s smaller than an iPhone (only 0.62 inches thick) and so fits more easily into a shirt pocket. It feels solid. If you threw it at something, it would leave a considerable dent. But you’re not going to want to throw this phone. It’s got cachet, a cool look, and a lot of useful features. HTC, T-Mobile and Google have come up with a winner. I’d say more, but I didn’t get to keep it.