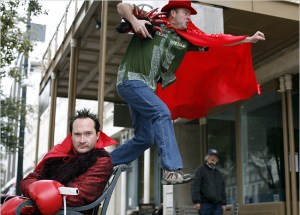 SouthPeak Games has agreed to buy the Gamecock Media Group. Hopefully, they know what they’re getting. The Gamecock founders are the unabashed goofballs of the video game industry.

The deal shows that Midlothian, Va.-based SouthPeak is serious about its expansion plan as it picks up Austin, Texas-based Gamecock. Melanie Mroz, chief executive of SouthPeak, said the deal will give SouthPeak a solid slate of new titles, including “Legendary,” “Mushroom Men,” and “Velvet Assassin.” The purchase price wasn’t disclosed.

Gamecock is run by Harry Miller and Mike Wilson, (pictured) two of the more colorful characters of games. (A third founder is Rick Stults). Miller and Wilson in particular don’t have much of a marketing budget but they draw attention to themselves with their antics. Opining for the old game industry trade show, E3, they hired “booth babes” and held a New Orleans-style funeral for once-wild E3 now that it has been replaced by something more corporate. Wilson waged a silly campaign to replace the president of the video game industry association. The company’s coming out party at E3 in 2007 featured a monologue by pornstar Ron Jeremy. At the Spike TV game awards in 2007, Gamecock executives rushed the stage just as “BioShock” developer Ken Levine was about to receive the Game of the Year award. Levine was left speechless.

But when it comes to games, the pair have a background as committed game developers who believed in independent game developers. They had once been top executives of Gathering of Developers, which waged a war against corporate games and favored small but feisty developers.

SouthPeak is also focused on developing games from independent developers. It raised $12. 9 million in venture capital this summer as part of an expansion plan.

SouthPeak’s investors include Terry Phillips, Melanie Mroz, Gregory Phillips, Andrea Gail Jones, and Abhishek Jan. Phillips said that the company publishes games that are developed by other companies. The company tries to find hit titles by finding both talented developers and properties on which to base games. Its biggest hit to date is “Two Worlds,” a fantasy game on the Xbox 360.

Phillips said this summer the company reduces its risk by outsourcing game development to independent developers in Australia, Canada, and Hungary. Big titles coming include sequels to Two Worlds, as well as “X-Blades” and the “steampunk fantasy” game “Edge of Twilight.” The company has 30 employees, mostly in Virginia. Phillips and his brother Gregory bought SouthPeak in 2000 for $7.5 million in cash. They got back into game publishing in 2005.

Legendary, a Gamecock shooting game about what happens when the forces of doomsday are unleashed, has received accolades in previews. SouthPeak expects to ship Legendary and Mushroom Men in the current quarter.

[Update] In an interview, Terry Phillips of SouthPeak Games said that Gamecock had some great games about to ship and that made them an attractive acquisition. He noted that Wilson and Miller had a knack for getting attention, but he focused on the games. Gamecock has about 18 people and SouthPeak has about 40. Phillips said that the company will likely make a filing tomorrow that spells out the purchase price, which he said was a good one. He noted that Gamecock and SouthPeak are similar because they both go after independent developers, but he noted that SouthPeak had built more distribution.