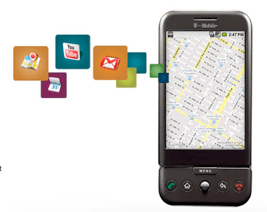 A month ago we reported that the T-Mobile G1, the first Google Android phone, would begin shipping on October 13 and begin arriving on Friday, October 17. Our source was confident in those dates. So it was a bit surprising when T-Mobile announced that October 22, the following Wednesday, would be the official launch. Now it appears our source was right.

Several people who pre-ordered the G1 are saying that it did, in fact, ship early this week and that the target date for delivery for many of them is October 17, the Android blog Phandroid reports. An item as hot as the G1 arriving a full five days early is pretty rare, as Boy Genius Report points out, so I would guess that our source was right all along and that T-Mobile was simply being cautious with the October 22 date. (That also is still probably the day it’ll first be in T-Mobile stores.)

VentureBeat’s Dean Takahashi got his hands on a G1 yesterday and came away impressed. He thinks it could give Apple’s iPhone a run for its money as the coolest gadget of the holiday season. (Keep in mind, though, that Dean’s a keyboard guy — as in, he dislikes the iPhone’s virtual keyboard — and that the G1 has a physical keyboard.)

Interestingly, we’ve also heard that there’s been some grumbling within Google about the G1. Some employees apparently don’t feel it lives up to its hype because the quality of the device is just not as good as some had hoped.