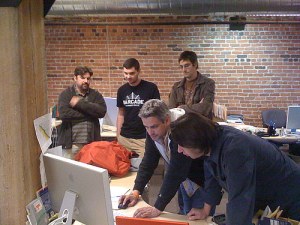 Ngmoco is unveiling its first three games for the iPhone and iPod Touch today. The San Francisco-based startup is on a tear. Neil Young, a former Electronic Arts executive, founded the company in June, raised $5.6 million from Maples Investments and the Kleiner Perkins iFund (targeted at iPhone-related startups) in July and is now about to publish his first titles.

These first games include two “fast apps,” or quick games that will sell for the “micro price” of 99 cents. They are called “MazeFinger” and “Topple,” and were conceived by Ngmoco before being handed to ouside developers, said Young (pictured left, holding mouse).

“We’re excited to be able to generate revenue so quickly, but it’s a fast-moving market,” he said.

The third game is a bigger deal. Ngmoco will publish “Rolando,” a flagship premium title that will carry a higher price when it debuts later this year. Young describes the game as a “platformer” — one that scrolls from side to side with largely two-dimensional animation. He said it would take advantage of all of the iPhone’s unique capabilities, including its four-inch touchscreen, which has “multitouch” capability, the ability to be touched simultaneously at more than one point on the screen. The game will also use the accelerometer, which senses which way the iPhone is facing.

It’s an impressive feat for the company to launch so quickly. But Young says the strategy is to focus on quality and to work on titles that emphasize the unique design of the iPhone. It won’t be easy to pursue that strategy, as there are already more than 1,000 games available on the Apple App Store, where people download applications to their phones or iPod Touch music players. Many of those applications are either free or sell for just 99 cents. Electronic Arts’ “Spore” title debuted at No. 3 and moved to No. 1. But it is already out of the top 10 just a few weeks later, suggesting that $9.99 games may not sell.

In Rolando, you tilt your device to roll cute little ball characters into and out of hot spots and puzzles. The goal is to help the colorful little creatures recover their world from the forces of darkness. It is reminiscent of “Loco Roco” on the PlayStation Portable. It will have 36 levels and four worlds created by pop-culture illustrator Mikko Walamies. It will be released later this fall.

Topple, meanwhile, is a block-building game that is reminiscent of both “Tetris” and Steven Spielberg’s Electronic Arts game “Boomblox.” You build a tower and try to keep it from falling, resisting the forces of gravity. In MazeFinger, you use your finger to trace paths through mazes on the touchscreen. Both games are expected to be available via the App Store as early as this weekend. 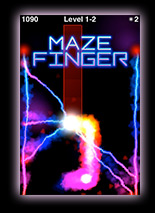 Rolando was already in the works at Simon Oliver’s British game studio, Hand Circus, when Ngmoco formed. With that game, the company will act as a traditional game publisher, selling and marketing the title produced by an external developer. Other studios working with Ngmoco include Other Ocean and Stumptown Game Machine. Ngmoco itself will focus on high-level creative production and publishing.

Young said there are a dozen titles in development and that Ngmoco will likely release two to four games per month. None of those are likely to be licensed brand games or ported from another game platform. The company has 18 employees, including chief creative officer Bob Stevenson, chief operating officer Joe Keene, and Alan Yu, former director of the Game Developers Conference and another EA veteran.

It will be interesting to see how Ngmoco does. What we do know, is that it has a sea of competitors, from old world game companies such as Electronic Arts and Sega to new players such as Zynga and Social Gaming Network.