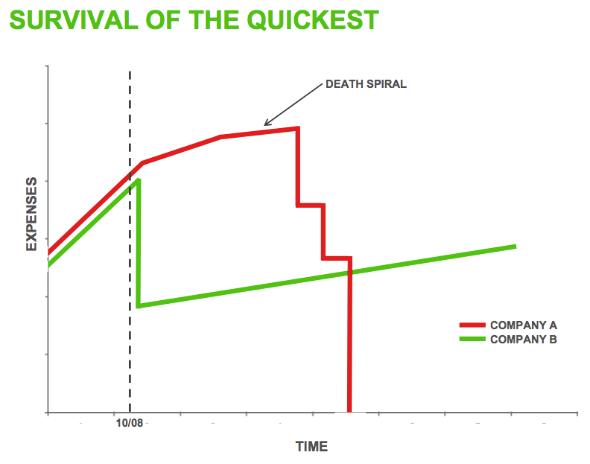 Even as the startup world watched bubbles popping in other industries over the past year, we hoped it wouldn’t hit us quite as hard. But it looks like we were hoping in vain. During the past week, a number of startups have announced job cuts as they prepare for what will likely be a long recession.

Here are latest two that we’ve heard about. Zivity, an adult-focused social network featuring tasteful photography of female nudes, has cut a third of its staff:

Co-founder Cyan Banister says that cuts were made across the board, and that the layoffs are a preventative measure that will ensure the company’s sustainability over the next few years as it has become much more difficult to raise further rounds of financing in the current economic climate.

Hi5, the third-place social network in the world, according to comScore, has also cut up to 15 percent of its 110 positions — although it is also still hiring. The company tells TechCrunch’s Erick Schonfeld that it “should not be lumped in with other startups that are cutting back right now in order to lower their burn rate and survive longer.” Hi5, popular in Latin America and various other countries around the world, saw growth surge over the last year, nearly doubling to 56 million in August from 32 million a year earlier.

We’ll continue covering how Silicon Valley retrenches to survive the coming years. For more, see our past coverage of cuts at Sequoia-backed Jive Software, at Seesmic, and at Tesla as well as Skyrider’s closure.

On a more personal note, there is no joy for me in covering this news. I grew up in Oregon in the ’80s when the timber industry disappeared and recession wracked the state; my parents were unemployed for a few years after my dad lost his produce store. I have some idea what it’s like for those who are losing their jobs, and for their families.

Let’s hope that the pain today at least leads to survival. As slide 49 from Sequoia Capital‘s now-infamous presentation on the downturn illustrates, above, cutting early helps avoid out-of-control problems later on, and instead positions companies to continue growing.

Startup executives, looking for how to make your business prosper during the recession? Consider attending our conference on the topic, October 29, 2008, featuring input from leading Silicon Valley thinkers.