Instructional video producer Howcast Media reeled in an additional $2 million in first-round financing from private individuals in the media industry, reports VentureWire. This bumps its total to $10 million, with some funding coming from Tudor Investment.

The New York-based website, founded by three ex-Googlers, provides a fairly large library of how-to videos sorted into categories like pets, parenting, fitness and food. For example, there are 12 videos explaining how to successfully break up with someone, 24 videos demonstrating proper oral hygiene, 43 on how to grow your own vegetable garden, etc. The videos are produced by the company itself, content partners and users (some of whom are paid for especially high-quality products). 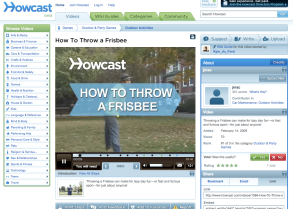 When the site first launched in February, VentureBeat senior editor Eric Eldon speculated that its simple interface, supplementary wiki guides and strict quality control might give it an edge over rival sites like WonderHowTo, Instructables, VideoJug, 5min and a litany of others. At the very least, it’s succeeded in striking distribution deals with big names like AOL, MySpace, YouTube, Verizon FiOS TV, Joost, and most recently Dailymotion. Not that this really differentiates it all that much — nor do its social networking features like video ranking or discussion forums. It’s still a cluttered and fragmented field, with no one horse pulling ahead for now.

Quality control alone certainly won’t be enough to push Howcast over the top. In an earlier VentureBeat interview, WonderHowTo execs also highlighted quality and relevance as the major attributes setting their service apart. And back in January, ComScore stats showed similar site DIY Network (backed by the TV channel) to be the clear leader, crushing the relatively small fries listed above.