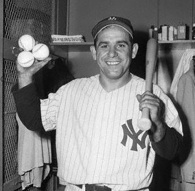 It’s hard to take any data collection in the 24-hour period following a product’s launch very seriously. But the mobile analytics and advertising firm Medialets compares its first data from Google’s Android Market with the first 24-hours of the iPhone App Store. Probably not surprisingly, the results are pretty similar.

People like games, shopping, music and weather, according to the data. Perhaps not coincidentally, those often seem to be topics people talk about or do when they’re bored, or meet someone for the first time. Upon first meeting the G1, the initial phone built using Google’s Android platform by T-Mobile, users appear to be gravitating towards apps that are obvious.

More interesting is that apparently only 62 applications were available in the Android Market. Compare this with over 600 that were available in Apple’s App Store during the same time period. That would seem to indicate developers’ reluctance to develop for the platform right from the get go. We’ve heard numerous times over the past several months from mobile developers that they were going to take a “wait and see” approach toward developing for this new platform. After all, there is no point in pouring resources into something if it doesn’t catch on, many of them noted. 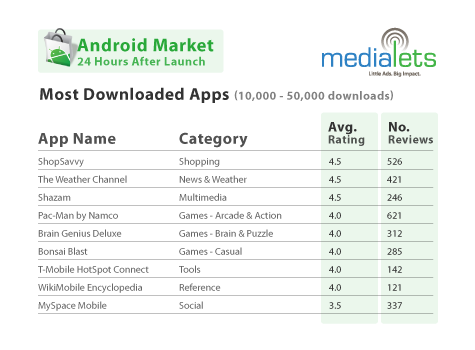 But the Android platform, while not as sexy as the iPhone platform, should catch on. Remember, the G1 is just the first of many devices that will run it. It also can play the “open” card, which is to say Google isn’t restricting what applications are developed for the Android Market, as opposed to Apple, which insists on approving each one. (And Google has definitely been playing that up.)

Another factor that can’t be overlooked in the lack of apps, is the fact that paid applications will not be available through the Android Market until the first quarter of 2009, as Medialets notes. Yes, all the applications currently out there are free right now, so it’s certain that some developers who aim to sell their Android apps are holding off until they can do so.

No doubt thanks to the limited selection, more applications in the Android Market were in the 10,000-50,000 download range. In fact, nine Android apps made it in that range while only two iPhone ones did during the same 24-hours period. Among the top Android app movers were The Weather Channel, Shazam, MySpace Mobile, Pac-Man and ShopSavvy, an application which was a winner in the first Android Developer Challenge, and that we’ve written about previously.

See more details on the relatively popularity of categories on each the platforms after the jump below. 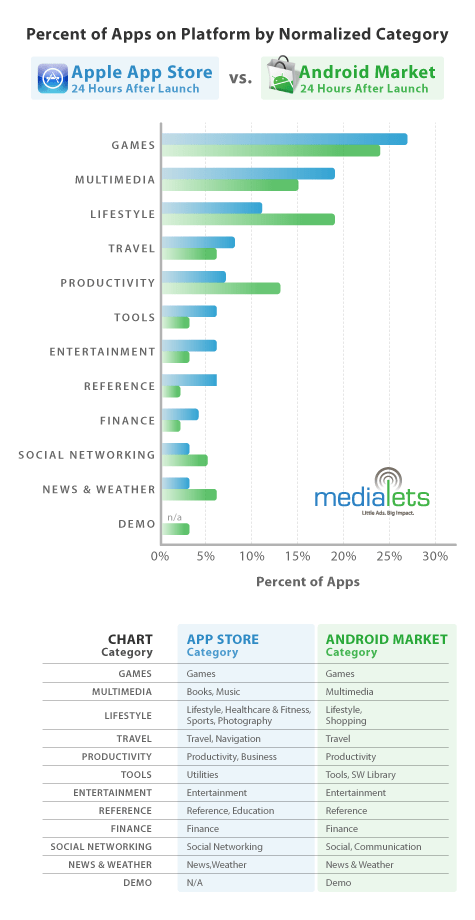