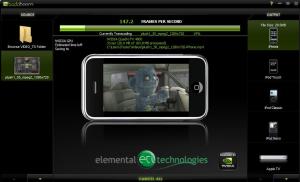 As I write this, I’m waiting for a long upload to YouTube to finish. It’s taking forever. If you’ve ever tried to move a movie or home video from a computer to a portable device, you know the feeling. That’s what Badaboom is for.

Elemental Technologies is launching its Badaboom Media Converter today as a tool that can quickly convert video so that it can be transferred faster from a computer to another gadget. The cool thing about it is that it doesn’t require a special custom video chip to do this. Rather, Elemental’s software taps the unused power of the graphics chip, the Nvidia GPU (graphics processing unit) with the CUDA programming language.

For a couple of years, Nvidia has been designing graphics chips that allow any untapped power to be used to run general-purpose programs. Badaboom is one of a wave of applications that Nvidia is supporting as part of a visual computing ecosystem. Nvidia actually invested in Elemental in order to get the company off the ground.

Portland, Ore.-based Elemental was formed in August 2006 by a team of former engineers at chip maker Pixelworks in Oregon. Sam Blackman, chief executive of Elemental, saw how tough it was to create custom video chips and decided to explore the CUDA alternative. Rather than create a chip, his team created software to run on the graphics chip, a much cheaper alternative that could accomplish the same thing as a custom chip.

Elemental created its first prototype in 2007. The software could decode an MPEG-2 video stream (one of the older but most popular video formats) and got tremendous performance results. The team has now produced a software-based H.264 encoder (based on one of the newest, most efficient video formats), which can take high-definition video and convert it to any format in a much shorter time than other solutions. Blackman said it runs about 18 times faster than iTunes at converting H.264 video.

The H.264 encoder can take a two-hour movie and convert it in maybe 15 or 20 minutes, provided your computer has a CUDA-enabled Nvidia GPU. If you did this on a machine that used the Intel microprocessor, it would take 45 minutes to an hour. On top of that, your machine would slow to a crawl. By contrast, since Badaboom uses the GPU only, you can use your computer to do other things as the conversion happens in the background.

The software is available as a free download. If you want to buy the permanent version, it costs $29.99. You can use it to convert home movies from DVDs so that they can run on a mobile phone, an iPod, a PlayStation Portable, an iPhone or a video player. The company also launched a professional version of the software, RapiHD, for video professionals last week. Blackman said he hopes that software will be used in broadcast video editing, replacing expensive equipment.

Thanks to the launches, Elemental will now be generating revenue. The software is distributed as a free trial with Nvidia’s GPU products. Blackman is working with add-on card makers to get them to bundle it with graphics cards for PCs.

Elemental has 16 employees, far fewer than it would need if it were making custom video chips. It has raised $7.1 million to date in funding from Nvidia, Voyager Capital, General Catalyst Partners and angels. Blackman said that he tapped a friend at Nvidia to make an introduction, and the graphics chip company invested after Elemental proved its technology could work.

Competitors include software programs from Nero and Roxio, as well as iTunes itself. There is also an open-source converter called X264. Blackman says all of those products are much slower than Badaboom. Over time, Elemental will work on more converters which can convert different video formats.