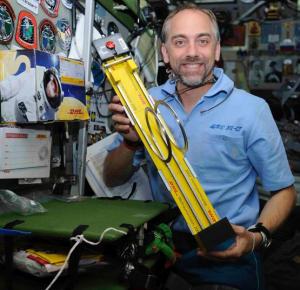 Game designer Richard Garriott returned safely to earth today after a trip to the International Space Station aboard a privately-funded rocket launched by Space Adventures.

Garriott landed in the Kazakhstan steppes aboard the Soyuz TMA-12 space craft with fellow crew members Sergei Volkov and Oleg Kononenko. Garriott, the son of NASA astronaut Owen Garriott, made history as the first U.S. second-generation astronaut to go into space. (Volkov was also a second-generation astronaut). He paid $30 million for the privilege. His journey was tracked on the Richard in Space website.

While he was up there, he left some DNA donated by celebrities such as comedian Stephen Colbert at the space station. That was a marketing tie-in to Garriott’s game, “Tabula Rasa,” which starts when an alien race invades earth and humans use backup DNA to save the human species. 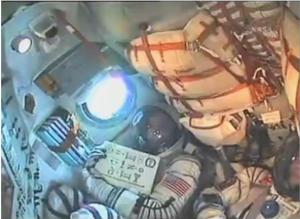 Garriott said in a statement that he was honored to follow in his father’s footsteps from 35 years ago. He got to perform some serious research and trained at a cosmonaut facility in Star City, Russia. The trip is a big step forward for Space Adventures’ plan to take tourists into space. Garriott took off on Oct. 12 with fellow crew members Mike Fincke and Yuri Lonchakov, who remained at the space station.

While he was there, he communicated (left) with gamers using a secret code in Tabula Rasa. He also talked with students at the Challenger Center for Space Science Education via a NASA-sponsored teleconference. He also conducted a ham radio downlink and two science experiments.

For an environmental cause, Garriott photographed a number of ecologically significant places on Earth. The photographs will be compared to shots taken 35 years ago by Garriott’s father while in space. Together, Garriott and the Nature Conservancy will review the images to document how the Earth has changed in one generation.

Garriott became famous as the designer of the “Ultima” series of fantasy role-playing computer games. He and his family created Origin Systems, bought by Electronic Arts in 1992. He formed Destination Games in 2000 and partnered with NCSoft to create Tabula Rasa. Unfortunately, the game had a tough launch last fall, and it remains to be seen if it will get a boost from Garriott’s space trip.