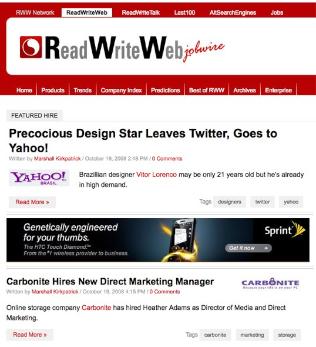 Our friends over at ReadWriteWeb are staying positive during the economic downturn — they’ve launched a mini-site to focus on jobs that people are getting, not losing. They’re calling it the Jobwire, and they’d been working on it months before the stock market started getting nailed.

This isn’t just a nice idea. Tracking hires can be a good way to figure out which companies are doing well. A prominent engineer going to a little-known startup, for example, can indicate promising stealth technology.

The site will have ten to twenty short posts per day, including a longer “Hire of the Day” that will include more context. RWW talks about it in more detail, here.