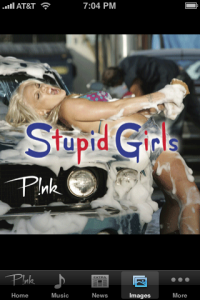 Apple has used its iTunes digital store to dominate not only the music on the Internet, but all of retail music. Now, artists are seeing an opportunity to use Apple’s newest hot store, the App Store, to promote their music. Two artists, Pink and Snow Patrol, launched apps this week to coincide with the launches of their new albums. The two take very different approaches.

It’s not entirely clear to me why you need an app to do all that (as opposed to Pink’s webpage or Wikipedia, etc), but I suppose if you’re really into Pink (or even P!nk), this app can further your obsession.

One nice thing about the P!nk app is that it very easily lets you listen to previews of songs off of her new album, Funhouse. 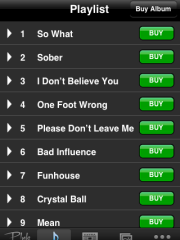 Instead of having to go to iTunes, all the tracks stream right within the app, and with one click you can be taken into the iTunes app to buy the song or album. (Unfortunately it takes a few seconds to go there as it apparently re-routes you through Sony BMG’s site first before taking you to iTunes.)

Snow Patrol’s app, again with an original title: Snow Patrol, is quite different. Instead of being a straight-up promotional tool, the band’s app is more artsy. Since the name of the new album is A Hundred Million Suns, I can only assume that the colored origami pieces of paper are meant to represent suns or stars. When you click on one it brings it to the front of the screen. From here you use the iPhone’s multi-touch capabilities to unfold the paper.

Inside each of these origami stars are lyrics to songs from the album. A cute, if not slightly tedious way to get to the information. There are also supposed to be promotional videos, but I had trouble finding them in the “millions” of stars (it’s more like two dozen). The app itself also seemed rather slow running on the iPhone. At least, unlike Pink’s app, this is somewhat original — though ultimately, just as disposable. 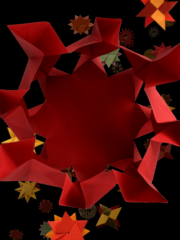 Here’s the thing: Neither of these apps really do much of anything. Look at the  HaHaHa app that was made as a promotion for the film The Dark Knight. At least it allowed you to take a picture of yourself or someone else and manipulate it when Joker-like graffiti. It would be cool for instance if the Pink or Snow Patrol apps gave you a song from the album to remix on your iPhone with some simple remixing tools. Or maybe even allowed you to make a free ringtone out of a song. Or something, anything, more inventive then Pink’s straight-up self-promotion.

The good news is that both apps are available for free.

I would bet we’ll see bands like Radiohead and Nine Inch Nails do some pretty cool thing in the future with iPhone apps to promote new work that they put out. Who knows, Nine Inch Nails’ Trent Reznor may even strategically place some iPhones in bathrooms around Europe to leak his entire next album.