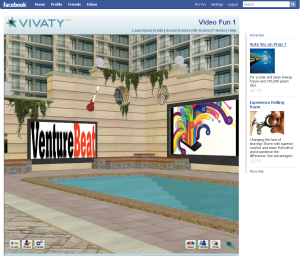 Pretty soon, we’ll all be hosting our own virtual worlds. VentureBeat has a new virtual scene today (you need a Windows computer to access it on the web), courtesy of Vivaty, which is launching its own widget to embed 3-D virtual scenes on any web page.

The Vivaty folks created our virtual scene in about half an hour. We can take the code for the scene and embed it on our page. It’s a cute way to invite readers to chat, join in a 3-D community, and stay engaged with our site longer. You can create your own character and talk with a virtual Matt Marshall or watch our video of the launch of the T-Mobile G1.

At least that’s the idea behind “Vivaty Everywhere.” By using Vivity’s tools to splice together a virtual scene, you can create a 3-D experience and embed it on any blog, site, brand or online destination. It’s a cut and paste process, making it easy to create virtual environments, said Keith McCurdy, chief executive. 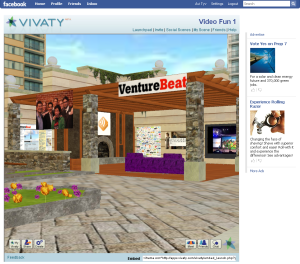 One company that’s taking Vivaty up on this is Universal Music Group, debuting today with the “Queen Listening Lounge”. The 3-D scene lets users create avatars, or virtual characters, and converse with each other about Queen’s latest album. The album, “The Cosmos Rocks,” launches today. In the lounge, fans can watch Queen videos, listen to music, dance, chat and share trivia. As many as 15 characters can join a room at once. When one room fills up, Vivaty creates another to accommodate more users.

Universal will release the scene on a variety of social networks. Andie D’Avino, a spokeswoman for Universal Music Group, said the group will use the virtual scene for Queen to engage directly with fans as they listen to the new album. She said the group hasn’t yet used Second Life to do something similar. She said that Vivaty’s browser-based approach works well because downloads required by other virtual worlds represent a barrier to consumers who just want to check something out briefly. 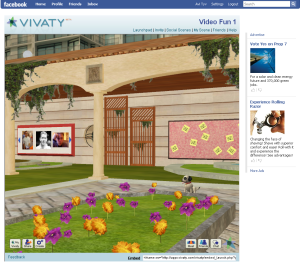 Fans can even take the scene and embed it on their own fan sites. You can also put the scenes — which are entirely browser-based and thus require no download — on Facebook or AOL’s Instant Messenger chat platform. You can customize your world to embed anything with a URL, including text, photos, live videos and other digital content. Queen has an estimated 450,000 fans on Facebook.

Vivaty has received $9.5 million in funding from Kleiner Perkins Caufield & Byers and Mohr Davidow Ventures. It was founded in 2007 and has 25 employees. The company started its virtual scene service on Facebook and AIM in May. McCurdy said it’s easy to create the rooms using standard 3-D animation tools.

Vivaty has competition from Lively by Google, a new virtual scene application launched this summer. Lively can also be embedded on any web page. Lively had a big spike in traffic in June, but it leveled off by August, according to Compete.com. But traffic at Lively is still much higher than it is at Vivaty’s beta site.

IMVU, which has a 3-D chat and virtual room business, also competes with Vivaty. McCurdy says Vivaty will focus on selling virtual goods over time.

During the summer, Vivaty did pilot programs with Target and Coke. The company has a bunch of templates for scenes now, including a half-dozen apartments, a beach scene and others.