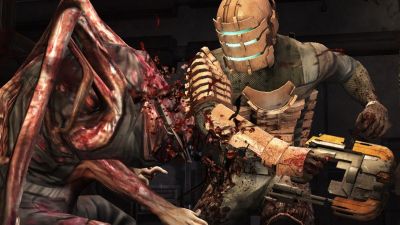 Electronic Arts reported a big loss today and said it would lay off 6 percent of its 9,000-person work force, or roughly 540 people.

The cutbacks come after a huge increase in the employment rolls thanks to acquisitions and EA’s focus on making original games built by its own internal studios.

The stock fell 14 percent in after-hours trading, down from $27.73 a share close to $23.75. EA will cut the jobs from its studio labels, its publishing operation, and corporate headquarters. The company will also reduce hiring in high-cost territories and expand in low-cost locations. That means fewer jobs in the U.S., more in offshore locations.

EA estimates the cuts will save it more than $50 million a year. The company lost $310 million, or 97 cents a share, in the second fiscal quarter ended Sept. 30. Not counting one-time items, EA’s loss of $20 million, or 6 cents a share, matched analysts’ expectations. A year ago, EA lost $195 million, or 62 cents a share. Revenues were up 40 percent to $894 million from a year ago.

During the quarter, EA relied on the staple of its sports franchise, Madden NFL 09, which sold 4.5 million copies. Spore sold two million units. That’s a respectable amount, and the title is sure to sell steadily into the future to mass market audiences. But it’s not the mega-hit that some had hoped for. Another big title was Warhammer Online: Age of Reckoning, which has 800,000 players playing in the online world. EA sold 1.2 million copies of the game.

The current third fiscal quarter, which closes at the end of December, is typically the strongest of the year. But EA chief executive John Riccitiello said in a statement, “Considering the slow down at retail we’ve seen in October, we are cautious in the short term.” Longer term, he remains bullish.

Riccitiello said in a conference call that the postponement of the Harry Potter movie and its accompanying game was a big reason for the shortfall. EA shifted an estimated $120 million in revenue into its next fiscal year. About $48 million of that was expected in the second fiscal quarter. EA lowered profit forecasts for the fiscal year.

But at the center of Riccitiello’s strategy is an expansion of EA’s internal studios. The company spent $100 million more in development costs this year. It has also invested $150 million in building a direct-to-consumer download business. And it paid $35 million in upfront costs to ally itself with key external game developers: Epic Games, id Software, and Grasshopper Manufacture. Today, EA also cut a deal alongside MTV and Harmonix to make a future title based on the music of The Beatles.

EA is following exactly the right strategies to turn things around. But it can’t afford to lose money forever, or to keep spending like crazy. It really needs one of its original titles to turn out to be a mega hit. The layoffs seemed inevitable in the face of the economic turmoil and the losses. It’s too bad that EA doesn’t have the cash cow of “World of Warcraft,” the online world owned by Activision Blizzard. That game has 11 million subscribers who pay fees every month. EA is hoping its Mythic and BioWare/Pandemic divisions will deliver in the future in the online world market.

EA is also paying for its slow shift to games on the Nintendo Wii and the Nintendo DS. There are some big titles in the current quarter, including the skyscraper-jumping game “Mirror’s Edge,” “DeadSpace,” an original sci-fi game which had huge promise but is off to a slow start, and “Left For Dead,” a zombie-slaying title where EA shares profits with outside developer Valve.