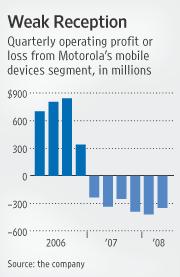 Motorola has become the sick man of the Open Handset Alliance, the industry consortium backing the Google-created Android operating system. The third largest handset manufacturer in the world, Motorola saw sales shrink more than 30 percent from a year ago, according to its third-quarter report out today, leaving it with 8.4 percent market share.

The company still plans to bet a lot of what’s left of its handset business on Android, though. A device running Android and somehow focused on social networking, and others, were expected out in the second quarter of 2009, according to earlier reports. Yet today, the company says to not expect anything along those lines until holiday season next year. Meanwhile, rival HTC has already launched the Android-powered G1 device, and a bevy of other manufacturers are planning their own.

Android will be the operating system for Motorola’s new mid-range devices going forward; Windows Mobile will still power its higher-end devices and its own P2K proprietary will still be used in its cheapest ones. To help save more than $800 million in costs, Motorola is cutting models that run Nokia’s Symbian operating system and its in-house Linux-Java system.

Sanjay Jha, who left his Android-focused software development position at chip maker Qualcomm to become Motorola’s co-chief executive in August, has also been considering cutting thousands of jobs. Motorola’s mobile device division has two to three times as many employees on a given project versus competitors, he reportedly said recently, “We have to create a well-run factory.” No cuts were announced today, though. [Update: They’ve just been announced. 3,000 over the next two quarters, reports the Chicago Tribune.]

The Android phone gives manufacturers like Motorola the flexibility to design their own interfaces — years ago, it built the Razr device and consumers loved it. Maybe the company can muster some of that old design mojo and build phones that stand out from Apple’s iPhone, Research In Motion’s Blackberry line, the G1, and the host of other Android devices coming out soon.

[Graph via the Wall Street Journal]