It’s new enough that there’s not even a commonly accepted term for it. Some call it “social capital” or “social entrepreneurism”, others “blended value”, and some choose the Starbucksian name “double-triple bottom line.” You might just call it making money from doing good.

Microcredit is the major innovation that popularized the idea of alternatives to traditional philanthropy. An economics professor named Mohammed Yunus famously pioneered giving very small loans to people in developing countries to build businesses or take care of basic needs, often something as simple as opening a small store or buying vaccinations for a family.

Contrast that to aid organizations that have spent hundreds of years providing selective handouts — with little result. In just three years, microfinancing by both non- and for-profit organizations has taken flight, with a huge effect. The key was simply adding old-fashioned capitalism and a business model to charity.

Today, businesses that act with philanthropic goals but operate under business plans that mandate turning a profit are beginning to consider themselves a distinct group. Companies like the fair-trade juice venture Adina World, low-cost solar light maker D.light Design, microfinance group Unitus and the online social change startup Virgance all have fundamentally different businesses, but the same motivator: a better world.

A recent conference, Social Capital Markets 2008, saw several hundred entrepreneurs gather in one place to trade ideas for getting financed and growing in a world that’s still dominated by old-line institutions like the Red Cross. A common business model involves co-dependent non- and for-profit arms working as a single unit. One example: Zerofootprint, a carbon calculator for cities that has a non-profit foundation doing strategy for the for-profit corporation.

While most philanthropic ventures still operate solely as non-profits, there’s a growing niche for the new breed. That’s because, as Elizabeth Funk of Unitus put it while speaking at the conference, “greed is one of the fundamental drivers of humanity.” For-profit businesses have a drive that was long ago lost in the sprawling bureaucracies of traditional aid groups.

The goal, however, is not solely maximizing profits. Good Capital, a venture investment firm in San Francisco that focuses on social capital, walks a cautious line with its investments. The fund requires a positive return on its money, but also guards against profit-taking. “Nobody wants what happened when Ben and Jerry’s sold,” co-founder Kevin Jones told me, referring to the socially responsible ice cream maker’s buyout by a giant conglomerate. “You had these great shops in San Francisco with social programs. All that went away within two months when Unilever bought.” 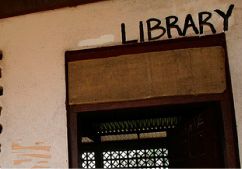 One of Good Capital’s early investments was Better World Books, which got $4.5 million earlier this year to collect old textbooks for resale or free distribution to developing countries. Jones relates that the company wanted to give away too many of its books, a move the investors had to block to maintain margins. “They were scaring away investors — they were scaring us,” he said. But those same investors also allowed other aid organizations to buy into Better World, a move Jones calls a “reverse poison pill” designed to help block potential buyers motivated only by profit.

Overall, the returns promised by funds like Good Capital, are lower than traditional venture investment, but there’s no shortage of investors who want in. Right now, those are typically “high net worth individuals”, in industry parlance — meaning rich people — but if the first generation of funds proves it can turn a profit, traditional investors like pension funds will likely come knocking as well.

What’s not lacking are young entrepreneurs looking for a way to change the world. Social capital is far from mature, and Jones predicts “a lot of failures” as the fledgling industry finds its wings, much as the organic food and fair trade markets have been doing for a decade. But those are now mature industries, and their successes foreshadow a permanent place for social investment.