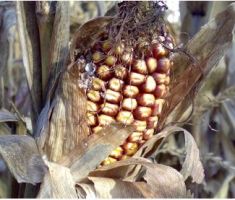 Verasun, an ethanol maker once cited by venture capitalist Vinod Khosla as one of the most innovative in the ethanol industry, appears to be disintegrating in what could become a case study of the dangers inherent in the biofuel industry.

The publicly-traded company’s troubles began last year as the price of corn began to drop, allowing its competitors to buy their raw material more cheaply — Verasun had made a bet locking itself into long-term agreements to buy the feedstock at a high price. However, skyrocketing oil prices looked like they might keep it afloat.

Enter a recession and oil back down near $60 a barrel, from highs near $150 earlier this year. Worse, the credit contraction prevented the company from taking on debt to continue operations past the tough spot. A search for potential buyers came up empty.

Verasun has filed for a Chapter 11, which means it will have time to regroup and renegotiate its commitments. However, the future doesn’t look good for the company, and a sale under unfavorable terms seems likely.

Just a year ago, this looked like one of the strongest biofuel companies on the market. But, as the Financial Times puts it, this looks like one boom that is busy drying up.