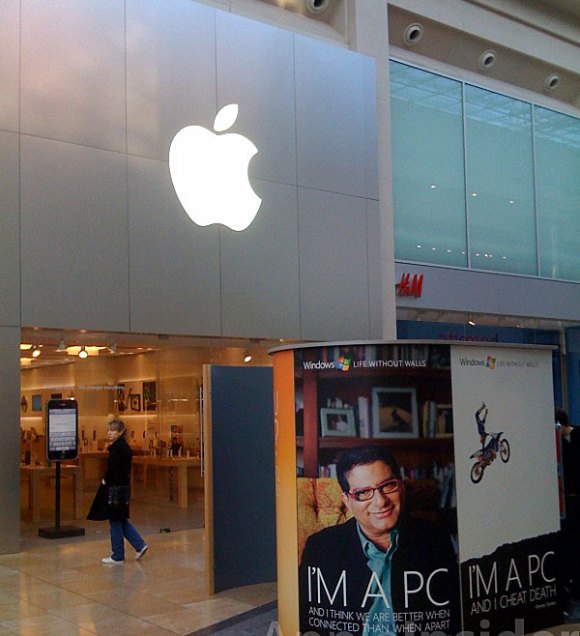 Following Microsoft’s odd Jerry Seinfeld and Bill Gates ads, the company launched into a more straightforward “I’m a PC” campaign, which emphasized how everyday people use WIndows-based PCs. These ads were meant as a direct response to Apple’s often condescending “Mac vs. PC” ads, in which a cool, hip Mac guy pokes fun at a slow, stodgy PC guy. Now it looks like Microsoft is taking its ads into the real world to compete with Apple as well.

Microsoft has started setting up booths around the world where users can record their own “I’m a PC” videos and send them to Microsoft — which may use them in upcoming TV spots. What’s interesting is the placement of at least one of these booths — right outside an Apple store. Literally, right outside the front doors. A man sent a picture of the booth in Birmingham, England to the Apple blog AppleInsider.

It’s usually a smart play for companies to advertise on competitors’ sites (if you can sneak it past them), but I wonder if taking it to the real world arena may backfire for Microsoft. For example, I could easily see some smug Apple fans (which yes, I’ve been accused of being) walking out of the Apple store, seeing the Microsoft booth and using it to record some “I’m a PC” videos which are, let’s just say, less than sincere.

This is all a part of Microsoft’s $300 million advertising campaign being executed by the firm Crispin Porter & Bogusky to help reshape the company’s image. It’s not yet clear how well that’s working, but Microsoft just showed off an early version of its new operating system, Windows 7, to mostly positive remarks at its PDC event this week.

In the end, no matter how much you spend on advertising and well-placed booths, it comes down to the product. If you have a good one, people will likely buy it, so it’s good to know Windows 7 is expected to be a big improvement over the disappointing Windows Vista.

It’s also interesting that Microsoft’s “I’m a PC” recording booth is wrapped in a giant “Life Without Walls” ad (Microsoft’s newest slogan), but the booth itself is in fact surrounded by walls. Maybe an open-air kiosk would have been more appropriate.