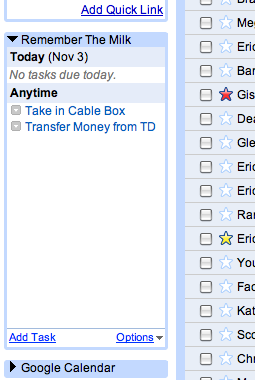 Google’s online email application Gmail is quickly turning into my main hub on the Internet. Not only does it house my email, it supports instant messaging (including Google Talk and AIM’s networks) and thanks to its brilliant Gmail Labs, services such as Google Calendar and Google Docs can be placed in Gmail’s sidebars as well. One thing that has been lacking from a productivity perspective however, is a proper to-do list. Today, thanks to the third party service Remember The Milk, you can add one.

The screenshot in Gmail Labs for the Google Docs gadget makes it look like Google wanted users to create to-do lists in Google Docs and access them through a link in the Google Doc widget in Gmail. But to be truly useful, you’ll want a to-do list that is right there on the page — one that can be edited and updated without ever leaving Gmail. Remember the Milk is taking advantage of Gmail Labs new “Add any gadget by URL” to create such a feature.

Though adding it is a little bit confusing — you first have to enable the “Add any gadget” feature, reload Gmail, then go back in and copy in a URL for Remember the Milk — once you have it installed, it fits in nicely with the other Gmail widgets.

Fans of Remember The Milk (it’s been a stand-alone service for quite some time) will appreciate that many of the service’s core features transfer nicely over to the Gmail widget. You can see all upcoming and overdue tasks, complete or postpone any as needed and of course, add new ones. Remember The Milk made a “quick add” feature to make adding any task very simple.

While there has been a Remember The Milk for Gmail Firefox extension available for sometime, those of us who don’t regularly use Firefox or who access Gmail from different computers often will appreciate this widget. The company lays out its advantages over the plug-in as follows:

This new gadget does have a few benefits over the Firefox extension: (a) it’s not limited to Firefox (big plus for IE, Safari, and Chrome users! :); (b) it doesn’t need to be installed in each browser where you use Gmail (once added to your Gmail account, it will work anywhere); and (c) it’s an “official” feature in Gmail Labs (unlike RTM for Gmail, which only has semi-official support through the experimental Gmail/Greasemonkey API and therefore can be vulnerable to Gmail code changes).

Such an add-on seems like the perfect use for Gmail’s new gadget functionality. It will be interesting to see what other web applications figure out ways to take advantage of it.

To learn how to install the Remember The Milk widget in your Gmail, follow the steps found on this page.