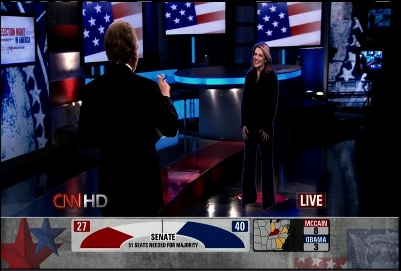 In addition to its Magic Wall touchable maps, CNN is also using some cool hologram technology tonight to interview guests from afar. The guests appear to be in the room and move about in three dimensions, even though their images are being beamed in from somewhere else.

USA Today says CNN has 44 cameras and 20 computers in each remote location to capture 360-degree imaging data of the person being interviewed. Those images are processed by computers and cameras in New York. The interviewees will be able to see host Wolf Blitzer and other CNN correspondents as they’re talking. What will they say? “Obi-wan Kenobi. You are my only hope.” (A Star Wars Princess Leia reference, for those of you lacking in pop culture trivia).