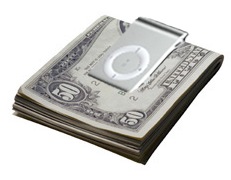 Departing Apple executive Tony Fadell is getting a pretty nice deal to stay on as an advisor and not go to any other company, an SEC filing reveals. Specifically, he’ll be getting a $300,000 annual salary and restricted stock options that are potentially worth millions.

Apple confirmed yesterday that Fadell, its senior vice president of the iPod Division, was stepping down. The reason the company gave for the departure is that Fadell wanted to spend more time with his young family. His wife, who also worked for Apple, is leaving as well. But Apple also announced that Fadell would remain affiliated with the company as an advisor to chief executive Steve Jobs, a gig which apparently pays very well.

Of course, “restricted” is the key word for the stock options. Fadell’s 77,500 options won’t vest until March 24, 2010, which means that if he were to leave, he’d forfeit the right to those millions of dollars. That means that Microsoft or whoever else might want to get their hands on the man who has been hailed as the “father of the iPod” won’t be getting access to him anytime soon.

This key part of the filing: