The Web 2.0 Summit has kicked off in San Francisco, and there is no sign of a downturn here. It’s a full house, with maybe 900 people in the room. The crowd has a lot of international attendees, judging by the folks from Canada, Ireland and Italy at my lunch table. I’ll be live blogging the conference, battery power permitting.

John Battelle and Tim O’Reilly, the event’s organizers, say they’re pleased that people still chose to come despite the tough economic environment. And O’Reilly said that Barack Obama’s victory is apropos because his “Yes, we can” mantra is a proxy for the American dream and the Silicon Valley belief in endless opportunities. The conference is in its fifth year and it features speakers such as Yahoo chief executive Jerry Yang, cyclist Lance Armstrong, and former Vice President Al Gore. The wide range of speakers is supposed to address the topic of “reinvention,” allowing the conference to discuss ideas well beyond the its past focus on finding the next cool web technology. 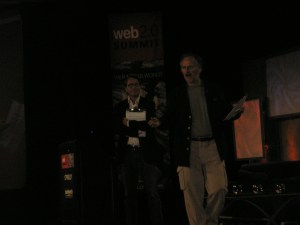 O’Reilly said that the silver lining of the downturn is that it clears out the clutter and allows everyone to focus on companies that can change the world.

“The next great companies won’t jump on the next bandwagon,” he said.

Larry Brilliant of Google.org is the first speaker. Brilliant, who founded The Well online service, runs the foundation inside Google, which dedicates 1 percent of its money to its charitable efforts. The group gives grants throughout the world and kickstarts things like geo-thermal green energy. His group functions like a venture capital firm, screening more than 10,000 ideas. If Google can make a critical contribution, it will adopt an idea.

The group put more than $100 million, or 95 percent of its money, into three initiatives. The first has to do with getting the right information in the hands of governments around the world in terms of how their populations are faring. He noted, for instance, that many governments don’t know how many of their people are literate or what the quality of drinking water is. Google.org’s initiative, “Inform and Empower,” does surveys that fill in the gaps in data collection.

Another initiative is “Predict and Prevent,” related to disease outbreaks. Brilliant noted that diseases, much like the HIV virus, can be detected and stopped if there is enough information gathered about people who get sick. The idea is to stop pandemics before they start. This mission, not surprisingly, fits with Google’s mission of organizing the world’s information. In these cases, Google.org will sometimes make investments that further Google’s own fortunes. But philanthropy isn’t the wedge to benefit the for-profit corporation, he said.

The last initiative involves coming up with renewable energies that can be cheaper than coal, such as less than 3 cents per kilowatt hour, much less than typical solar costs today. Brilliant said that the group has invested more than $50 million in wind, thermal and solar companies. He considers this effort core to Google because the company uses a lot of electricity in its data centers and it doesn’t want to contribute to global warming.