Public details have been scant about the social search product from The Mechanical Zoo, a company chock full of former Googlers that just announced it raised $6 million from August Capital and Baseline Ventures. But for the last three months, I’ve actually been a beta tester for the company’s first product, Aardvark.im.

It’s one of the best web applications I’ve seen during my year with VentureBeat.

The simplest explanation is Yahoo Answers meets Twitter — real-time, rapid fire responses, by actual human beings, to intelligent (and not-so-intelligent) questions. It helps you find answers that are too complicated, even for Google’s search algorithms.

This is very different than the brouhaha of expectations crafted for search engines Cuil and Powerset. Why? Cuil wants to index more pages with better and more relevant results, and Powerset (which was purchased by Microsoft for more than $100 million) attempted to improve results with its natural language processing. Aardvark, on the other hand, takes the cake because it doesn’t try to use artificial intelligence to match a question with an answer. Instead, it uses its advanced algorithms to match the question with a number of people who can answer the question.

Essentially, when a user sends a question to Aardvark (via email or instant message), the service analyzes the question and categorizes it, then distributes the question to those who have self-appointed domain knowledge in that category, who can then respond while retaining some level of anonymity.

Other users who receive the question can either answer it directly, pass the question on, or even request to receive all answers. Where Aardvark gets social is that for every user who answers your questions (or vice versa), it creates a social connection and adds that person to your graph. Also, you can specify that you trust certain friends for certain categories.

For example, I might say that I trust VentureBeat’s Eric Eldon for information on “Oregon” or “Facebook” or “Politics.” That way, when I send a question to Aardvark, it will first check against my existing social graph to see if one of my friends/connections is an expert in the relevant category. I can also self-appoint myself in categories, perhaps “college football” or “foreign languages” or “music technology,” and Aardvark will send me questions about those categories, in addition to my previously listed interests that I filled in upon signing up. The initial interests can be imported directly from your Facebook profile, while the categories you’d like to answer are up to the user.

In the example below, you can see that I sent an email to Aardvark about finding housing in Hollywood, Calif. Aardvark then responded with an automated note to let me know it has received the question. 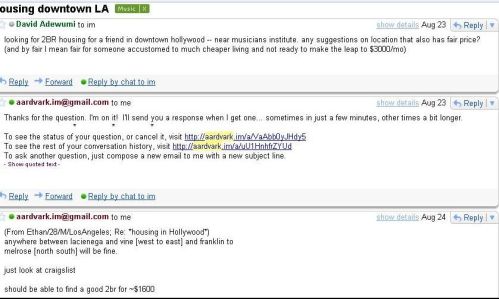 Later, I received a response from Ethan, a 28-year-old male from LA, with a suggestion on location and pricing.

The second screenshot is a snippet of my profile at the aardvark.im web page. I can of course see and edit my personal profile, but also see a history of the questions I’ve asked and the answers I received. I can see that I am connected with Ethan, who invited me to the Aardvark service. Ethan’s already answered questions about concerts in Los Angeles, and the profile reads that he knows a lot about music sites and indie music. I trust Ethan for questions on Los Angeles and the music business. 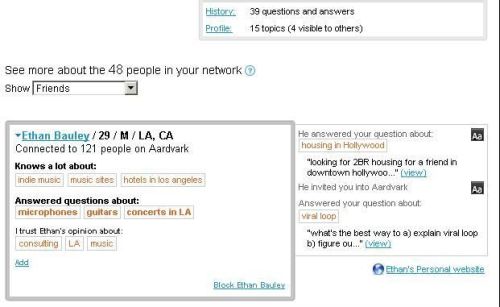 Why is this so important?

First, let’s analyze how some people use web darling Twitter.

And of course, Twitter is huge when you are on the road. I got advice on coffee in Paddington Station, where to get a U.K. blackberry charger, and a host of other suggestions on life in Paris via friends and followers on Twitter on this trip.

Fred has more than 7,000 users on Twitter, I have barely 200 followers — but with Aardvark it not only evens the playing field, but opens the possibility of much, much more because of the network effect: The more users on Aardvark (there are currently more than 1,500 testing the beta), the more knowledge is available, and the faster the response.

Aardvark brings that power to the masses, and it leverages the collective intelligence (like Yahoo Answers) in real-time (like Twitter) without restricting you to just your followers.

And you don’t have to worry about spammers.

Despite being quite powerful, the service still has its faults (after all, it is in beta testing). You can’t search and view other users’ questions/answers on Aardvark –but this is something that should be available when the site is public. Also, while I like the idea of social connections, I could easily recognize other users on the platform just by first name, last initial and location. Ivan K. from Boston, is Ivan Kirigin, one of the founders of TipJoy (I e-mailed back to verify). As a safeguard for privacy, I might not want every question I ask tied to my account/user name.

I asked Rob Spiro, part of Mechanical Zoo’s research team, about this issue, and he replied:

You’ll see more about the people you’re interacting with, you’ll see how you’re connected socially. The routing algorithm will start favoring friends-of-friends, which is a very cool experience. It may be a strange transition for our existing users, but ultimately we’re confident it will lead to better, faster answers with more credibility.

It might make sense to add a delicious-like “do not share” feature that will automatically make any question asked (or answer given) anonymous and not tied to a user’s account.

Finally, the service’s biggest challenge is how to get user adoption. Creating incentives for people to provide information — to give, and not just take — is something that may or may not be prohibitively expensive, depending on how smart the company is in generating good will among its community. Will there be enough fanatical users of the service to answer everyone’s questions for free?

Overall, I think this is a phenomenal service, and is one of the best technologies/applications I’ve seen in a long, long time. There’s a good reason why Marissa Mayer of Google praised social search — it’s one of the natural evolutions of search. Aardvark.im is much more effective than Google’s search in a plethora of situations.

And it will most likely have the same initial business model — search-based text ads.