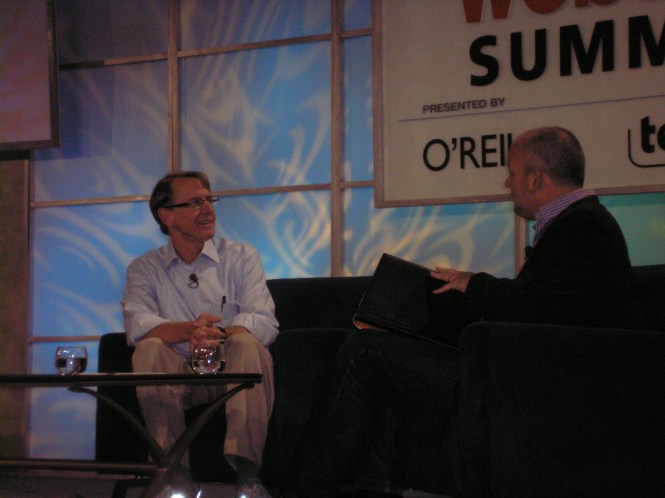 Journalist John Heileman is interviewing John Doerr on stage at the Web 2.0 Summit in San Francisco today. His first question: Who should Barack Obama name as chief technology officer for the U.S. government?

Doerr said there are three big technology problems the government will face: energy, basic research, and investment in universities. And he recommends Bill Joy, cofounder of Sun and a partner at Doerr’s own firm, for the CTO job.

What should a U.S. CTO do? Doerr says we invest less than $1 billion in renewable energy each year, compared to $32 billion for healthcare. He also says the country should boost education and invest more in creating more engineers. He says we should “staple a green card to the diploma” of any immigrant students who get a degree in engineering.

Doerr repeated what he said at VentureBeat’s downturn session: The loss of $60 trillion in wealth — 40 percent of the market value — in the last month or so isn’t just a downturn. It represents a crisis of confidence in the country’s leadership. At the height of the venture capital boom before the 2000 bubble the peak VC investment was $100 billion. In 2007, the peak VC investment was $37 billion. A lot smaller. The 2008 number is likely to be about $15 billion or $16 billion. Next year, new VC commitments are expected to be $5 billion to $10 billion.

The optimistic view: If hardcore entrepreneurs can raise money in this environment, they can do anything.

Will good ideas still get funded? Doerr says yes. Only 5 percent of the VC firms make all of the profits and none of those firms are going out of business, he says. But liquidity isn’t likely going to happen much in the next few years. “Google just isn’t going to buy,” he says. “Don’t cut with a meat ax.”

Doerr covers what startups should do in the downturn (as he did earlier in our panel). While he recommends that companies curtail spending, he says, “Make sure you don’t cut hope.” Despite a recent Fortune magazine story saying Kleiner Perkins had given up on the web, Doerr says Kleiner has made nine investments in web-related companies, including a number in iPhone-related investments. That’s maybe $60 million in investments. Digital tech startups are getting about as much money as cleantech companies from Kleiner, Doerr says.

“We are doubling down on this opportunity, but doing it very strategically,” he says.

Doerr says he’s bullish on the iPhone. He notes that 6 million were sold in the first year, and 6 million more in the last 120 of the second model. Doerr says the most exciting Kleiner-funded company based on the iPhone is one that is familiar to VentureBeat readers: Neil Young’s Ngmoco. The first two games rocketed to 1 million downloads, 6,000 per hour, all because of the iPhone’s App Store, Doerr says.

“Gaming has been recession proof,” he says. “We’ll see where it goes. We had no idea it would go like that.”

He is also high on Kleiner-funded Zynga, a social gaming company that’s doubling its users every 90 days, and he’s excited about visual-interface company Cooliris.