Five people called John Battelle today to ask him if Jerry Yang, the embattled chief executive of Yahoo, would show up for his appointed appearance at the Web 2.0 Summit. Well, Jerry is here. Battelle says that Yang doesn’t walk away from a fight.

Battelle, organizer of the conference, asked Yang how things were, outside of Yahoo. Yang said, “It’s been a pretty amazing year.” Why didn’t he take the Microsoft offer at $33 a share? A lot of people have replayed that conversation, Yang said.

“Look, the idea of selling to Microsoft was something we knew about,” he said. “I don’t think it is a bad idea at all….At the right price. We were willing to sell the company. They walked away from a public offer. We wanted to negotiate. We felt we weren’t that far apart. They withdrew and have since been very clear about not being interested. We have a board. We have a lot of stakeholders. We believed we were doing the right thing every step of the way.”

Was it because of Yang’s ego? Yang said, “I don’t have an ego about remaining independent or not.” Batelle said he was surprised at that. Yang said he went back to Microsoft, but they weren’t interested. He said he had a lot of respect for Steve Ballmer, chief executive of Microsoft, and that it wasn’t personal.

Regarding the deal with Google, which fell apart yesterday due to antitrust concerns, Yang said, “We were disappointed that [the government] didn’t understand how it was good for consumers.” He said he was disappointed Google pulled out too. 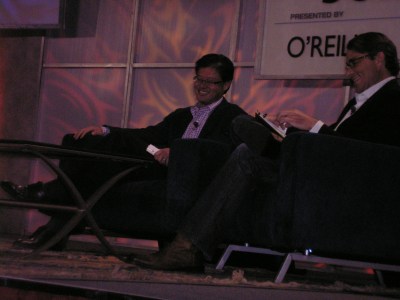 “When we started a deal with Google, it was clear it was two competitors trying to compete more by doing this,” he said. “We were trying to explain why this would work. If we could take advantage of Google’s listings, we would have a better result for our users.”

From March to now, Yang said that Yahoo’s search marketplace has become more robust. It is not true, Yang said, that because the Google deal fell apart that it means that Yahoo is not doing well in search. He said, “Why did Google pull out? You have to ask them. I really thought that the government does not understand our industry. They have a definition of the market that is too narrow. But they’re the government.”

Battelle asked why Yang would come back when he was so rich. Why come back in 2006 as CEO? Why are you the right guy?

“I felt very comfortable,” Yang said. “I did not make the decision lightly. It’s a very serious position. I wanted to make a change at Yahoo. If you look at what is happening inside Yahoo. There is a lot of change. A lot of people coming and leaving. But the plan is being done: rewiring Yahoo into a platform company. That was the dream I had in coming back and that is what we are still doing today.”

He said Yahoo is better at its core advertising business. “I don’t regret a minute of it,” Yang said. “I’m passionate about it. That’s the reason I am here.”

He said that Yahoo is trying to change its business and its culture by becoming more open, particularly to outside developers. It’s creating its site so it can be more social, not just because that’s trendy, but because it can deliver a better experience for users that way. He said Yahoo is trying to become more “platform driven, more product driven.”

Yang says the company has signed a lot of newspapers, who are struggling but do have fast-growing online properties. Asked if Yahoo will start buying again, Yang said, “Yeah. We bought 40 companies. It is an important part of how we deal with the start-up community and grow our product talent. We bought on the ad side, on the consumer side. They’re not always as visible as Flickr. But I would say that is an important part of how we change Yahoo.”

Asked if he was buying AOL, Yang said, “I can’t talk about that John. If I told you, I would have to kill you.”

“I might take that bullet just for the pride,” Battelle said.

As for the tough economy, Yang said that Yahoo grew up in a similar tough environment. “I’m not sure I would do too many things differently” if he were starting Yahoo today,” he said. “You have to preserve and protect the company so that it can survive long term. You need time to execute a long-term vision. That’s just critical.”

As for geo technology and mapping, Yang said that through mobile, his company is executing on providing good services.

“If you’re not in the game to win, you shouldn’t be in the game,” he said.

[Post script: At a later event, Battelle said Yang emailed him and said the interview was fair. But as Battelle introduced cyclist Lance Armstrong after dinner, Battelle said, “I’m not going to Jerry Yang you.” Then Battelle asked about Texas football, and Armstrong responded, “You Jerry Yanged me.”]