Back in the day before people like Al Gore were using Twitter, users used to enjoy getting updates by way of instant messages. It was useful to get updates in real time through an application (some IM service) that you probably already had open. Unfortunately, during its attempt to make the service actually usable, Twitter had to suspend its IM service. At first it promised that it would be back shortly, but recently, it admitted that it probably wasn’t going to come back anytime soon. Luckily, once again, FriendFeed comes to the rescue with FriendFeed over IM.

The new feature for the service allows you to be notified over IM when there is new activity in your feed, whether it be new posts from someone you follow or new comments, according to the FriendFeed blog. You can also just subscribe to get alerts when someone comments on your posted items, among other customizable options (such as only getting updates from select friend lists).

There are also several commands you can send back to FriendFeed over IM to do things like respond to comments and even “like” items (indicate you enjoy them with a smiley face). The full list of those commands is here.

I just turned the service on to alert me when someone comments on one of my items. It’s brilliant — I don’t need to watch my live FriendFeed view all the time anymore.

Unfortunately, for right now the service only works with Google Talk or Jabber IM accounts. It’d be nice to see the larger AOL Instant Messenger (AIM) and Yahoo Messenger included as well.

I note that this is FriendFeed coming to the rescue of Twitter’s lack of IM service because the service pulls in Twitter information, so you could use it to send Twitter updates alerts just as you used to do with Twitter itself. Of course, there is no way to drill down yet to only receive updates from Twitter for friends, but considering FriendFeed has this drill down functionality in its new “Post to Twitter” feature, I bet we’ll see it here too eventually. You could also always sign up for a new FriendFeed account and only use it to see people’s Twitter updates, and then send those over IM.

It looks as if once again, the FriendFeed team is proving it technical competence with a feature that another service can’t implement. Of course, to be fair, Twitter is much larger in terms of usage than FriendFeed, so we’ll see if FriendFeed can keep IM up as it grows. 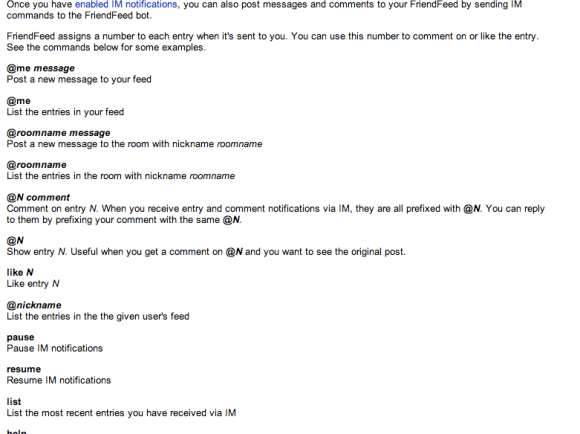