ImageShack, a site where users can host their images and videos, has raised $15 million from Sequoia Capital, a reliable source tells us. The sizable backing from one of Silicon Valley’s most prestigious venture firms is pretty darn impressive, especially for yet another site in the crowded online photo market, and at a time when web investments are falling.

If the news sounds a little familiar, it’s because TechCrunch‘s Erick Schonfeld reported an unconfirmed rumor of Sequoia backing ImageShack for $10 million back in May. Chief executive Jack Levin, an early Google employee, would only say he was definitely seeking funding, so it wasn’t clear if the round had closed. Presumably, the round has closed by now, or had already closed back then.

The Los Gatos, Calif. startup’s revenue will come from a combination of affordable subscriptions and advertising, Levin said, with ImageShack’s advertising utilizing the data the site collects about its users. Something about the business plan must have grabbed Sequoia’s attention, despite the many other photo-hosting sites out there.

Our source also says ImageShack has seen “explosive growth.” Data provided by comScore doesn’t really reflect that, showing a total of 32.7 million visitors to the ImageShack site in September, up only 5 percent from the same month last year. In comparison, unique visitors to Facebook‘s photo service has increased by 116 perent, and even Photobucket‘s traffic is up 17 percent. Still, that means ImageShack is one of the big players in this field, coming in at number six in comScore’s list of the top photo-sharing sites. ImageShack’s fact sheet also says it serves more than 2.5 billion images per day.

The company did not respond to my request for confirmation or comment. 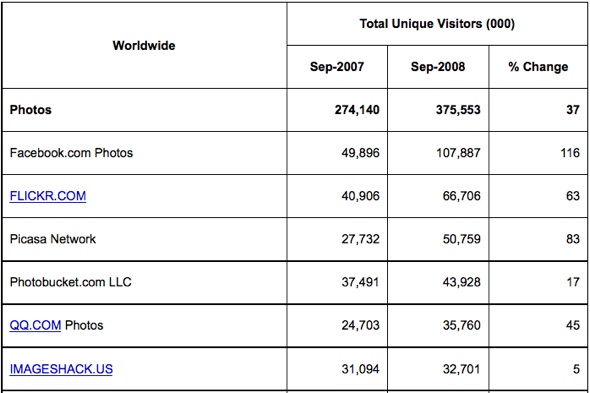