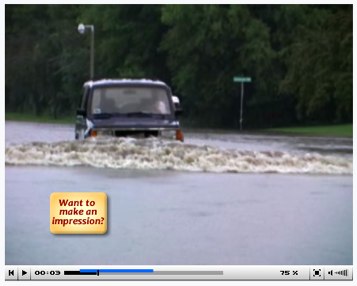 Keystream is an online video ad startup coming out of stealth today, joining a pack of others trying to do similar things. It lets an online video publisher run an ad that appears in the empty part of a video. For example, in this picture of a Land Rover charging through a flooded road, there’s a sample ad that says “Want to make an impression?” If you click on the ad, the video pauses and a new page launches with more information from the advertiser.

This form of ad can appear anywhere on a video that Keystream’s algorithms discovers to be lacking in interesting content. Publishers can customize where ads will run within a video, such as only on the lower part or upper part within the screen — or where or when they shouldn’t run. It’s somewhat similar to overlay ads that run on the bottom part of videos, as seen on YouTube and many other video sites. Keystream says it typically inserts an ad every two minutes — although timing is also up to publishers. It claims it has been getting better click-through rates than “standard forms of advertising.” Its white-label ad video placement service is now open to publishers and advertisers, following testing its product out with the United Kingdom’s ITV and USswitch.com and Freesat in the U.S.

Robin Wauters over at TechCrunch finds this format pretty annoying, and I’m inclined to agree. I’d rather the ad run somewhere relatively out of the way; I’m even willing to deal with a pre-roll ad that runs before a video starts, rather than get my video-watching disrupted like this.

Meanwhile, other forms of online video advertising seem to be faring better. Revision3, an online video studio, has reportedly tripled its revenues to $3 million this year by selling sponsorships. For example, its flagship show, DiggNation, integrated a Michelob specialty beer campaign wherein its hosts drank Michelob beer. It got its watchers to drink more Michelob beer, too, the studio says.

Mountain View, Calif.-based Keystream has raised $1.3 million from Voyager Capital and angel investors, and is raising a second round.