Sandbridge Technologies is announcing today that it has created a chip that could represent the Holy Grail of wireless computing: a processor that can perform software-defined radio with low cost and low power consumption.

Software-defined radio, or SDR, is the ability for a single radio chip to change its identity with a simple change of software running on it. One minute, it’s a global positioning system radio. The next, it is processing voice calls using the U.S.-centric CDMA wireless protocol. Sandbridge said that its chip is sophisticated enough to run eight different wireless protocols, meaning a phone based on the chip could work anywhere in the world.

Usually, chip makers have to create separate chips to handle more than a couple of wireless radio protocols. The BlackBerry World Phone from Verizon uses several chips that allow it to make calls in most places of the world. But phones with the Sandbridge SB3500 chip could get by with just one, maybe two. The chip is like a chameleon, shedding its skin colors based on a change in software.

Given the potential, it’s surprising that nobody used Sandbridge’s first-generation chip, which launched in 2006. Three customers signed up to use it in innovative phones, but none of those customers succeeded in getting to market. That’s why some experts, such as Will Strauss, an analyst at Forward Concepts in Tempe, Ariz., will believe it when they see it. As the failure of the first chip suggests, this is a high risk game where highly touted technologies don’t always live up to their initial billing.

But if the second chip succeeds where the first one failed, the implications could be staggering for the advance of mobile technology.

The chip can be the heart of a 4G cell phone (or phones with high-speed data networks). Such networks could be based on WiMax radio signals or Long-Term Evolution (LTE), which are the two contenders for next-generation cell phone technology. With the Sandbridge, just about every phone could have fully functional broadcast TV video and Internet speeds that are faster than home computers (assuming the phone’s network has the right infrastructure built).

“I think it’s sound technology,” said Jeff Bier, a signal processing expert at Berkeley Design Technology, an industry consulting firm. “We see a processor startup company every week. A lot fall in the bin of a solution looking for a problem. Someone dreamed up an archictecture for a chip and fell in love with it. Sandbridge is not in that category. There is innovation here and I’ve seen the chips work. They are going after the Holy Grail of computing.” 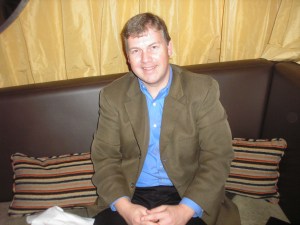 John Glossner, chief executive of Sandbridge, said the company has learned its lesson. It redesigned the chip, made it more robust, and is now in the process of signing up customers for it. Cell phones with the chips in them could start selling in the second half of 2009.

It’s been a long road. Software-defined radio has been a dream of the wireless industry for more than a decade. About 10 years ago, a spate of companies thought they had the answer with so-called reconfigurable chips that could recreate their own circuitry on the fly as needed. But those companies all crashed and burned, mainly because they couldn’t make reliable chips that consumed a small amount of power. Their costs also wound up costing too much. Companies such as Chameleon Systems and QuickSilver Technology left huge craters after burning through tens of millions of dollars in funding.

Big rivals such as Qualcomm, Texas Instruments, Freescale and Broadcom would benefit enormously if they successfully invented a software-defined radio. But after many years of research, none of these leaders in cell phone radios have deployed such chips. Intel has talked about SDR too, but it hasn’t shipped anything. Every year, the SDR forum meets to discuss progress. Glossner, himself, heads the commercial part of the forum, while others focus on military solutions. It will be exceedingy hard to unseat the incumbents, despite the high level of integration, Bier said.

Sandbridge was founded in 2001 and currently has about 49 people on staff. It raised $60 million in three rounds from Tallwood Venture Capital, Summerhill Venture Partners, and Doughty Hanson. The company’s engineers figured out clever tricks to create what they call a “responsive processor,” or one that can be interrupted in midstream. The processor has many active elements, but it isn’t a nightmare to program like other complex chips, Glossner said.

One surviving rival is Picochip, which is making SDR-like chips for wireless infrastructure. But its chips consume a lot of power, while Sandbridge says its chip consumes just half a watt of power. That’s about the same as many other less capable cell phone processors. With the SB3500, the same chip could handle a cell phone call, high-speed data, video broadcasts, navigation signal processing, and other functions — all in all, the same chip could handle eight different radio signals. Glossner estimates the company could get rid of three chips in a complex smart phone.

Tanuj Raja, Sandbridge’s head of business development, said the company is getting good traction among potential customers. He thinks the company’s offering will work best in regions of the world where the standards for wireless radios haven’t been set in stone.

Once the company does well in cell phones, it could move on to other markets that can benefit from devices able to operate in multiple modes at the same time. It could, for instance, be used in complex military radios that have to operate reliably in a battlefield environment with a lot of potential interference. Sandbridge isn’t pursuing those opportunities right now.

The company doesn’t have a huge team, and things can go wrong with its plans. But it’s good to see that the spirit of innovation is alive and well in the semiconductor industry.