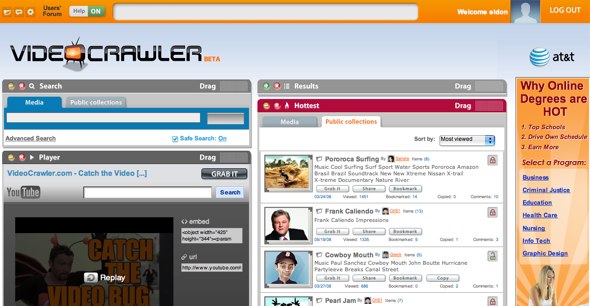 Can AT&T be more than a “dumb pipe” — can it go beyond providing infrastructure for phones, cable television and Internet services? Its forays into content continue today, with its official launch of its video aggregator site VideoCrawler.com.

The site, which has been live for a few months, aggregates user-generated videos from YouTube and other sites around the web, using a white-label service provided by a startup called Divvio. You can watch videos, or create your own “channel” of videos that you can watch in one consecutive stream. VideoCrawler also aggregates music, Internet radio, games and ring tones — although those aren’t in evidence on the site, at this point.

The VideoCrawler interface, which one might describe as Spartan, lets you drag and drop windows, like the video player or the channels feature. You can also create your own channel of videos, or watch other channels, including a channel of videos that are getting watched the most. You can also embed videos on other sites.

Of course, Google Video and many other video aggregation sites have been around for years. So what’s new here? Divvio says it has indexed more than half a billion video clips from thousands of sites using its proprietary technology, including videos in Flash, Quicktime, and others — it doesn’t host videos itself. This means it might be able to surface more videos that users will find interesting and help a site like VideoCrawler stand out for the quality of its clips. The startup also provides what it believes is superior video search and video traffic analytics, as well as copyright compliance technology that identifies when a video has been plagiarized.

Menlo Park Calif.-based Divvio says it has other clients of similar size to AT&T, and envisions being a back-end platform providing a wide range of online multimedia services to other companies. It was founded in 2006 by former AT&T chief technology officer and chief information officer, Hossein Eslambolchi, and has raised more than $2 million (that we know of) Allegis Capital, Presidio STX and angel investors.

AT&T also plans to grow VideoCrawler through marketing on sites like MyYearbook.com, and integration with its media content site. At this point, VideoCrawler is clearly in its experimental stages. AT&T is collecting data about user behavior to see where the traction is, and the company is thinking about how it might roll out the service across mobile and cable, eventually.