The film studio Red Eagle Entertainment is making a big bet today as it announces it is starting a video game publishing studio, Red Eagle Games, which will make games based on the epic fantasy “Wheel of Time” novels by Robert Jordan, VentureBeat has learned.

The  books have sold more than 44 million copies worldwide and Malibu, Calif.-based Red Eagle Entertainment has the rights to making films, TV shows and games based on the property. At least one major motion picture, based on the first novel “The Eye of the World,” is in the works.

There are 11 novels in the series (with a 12th coming from a new writer since Jordan, whose real name was James Oliver Rigney, passed away in 2007). The series is known for its detailed imaginary world, large cast of characters and an edgy “Lord of the Rings” meets “Road Warrior” blend of fantasy and sci-fi.

Former IBM executives Rick Selvage and Larry Mondragon are producers at Red Eagle Entertainment, a film company they started in 2003 after obtaining the series rights. News recently leaked that Universal will make the movie based on Red Eagle Entertainment’s rights on a $150 million budget, though no formal announcement has been made. 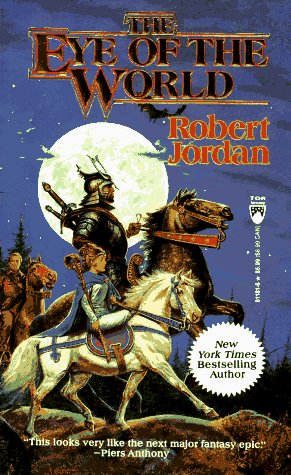 Selvage said in an interview that the game company will make a series of games that will be co-launched with the movies. In addition, Red Eagle Games will make a massively multiplayer online game based on the Wheel of Time universe.

“We’ve got a huge running start with this property,” Selvage said. “We expect to have a game based on every movie, and we expect no less than three movies, though that depends on how well each does.”

Between the films and the games, the companies are expecting to spend hundreds of millions of dollars on the entertainment property. While the movie financing is in place, Selvage said he is just beginning the process of raising money for the game studio. That could prove difficult, but he said he has already received an enthusiastic reaction, largely because the rights to the series are considered so valuable.

While the twin movie and game approach is risky, it reflects a growing trend in the industry. Video games have become so lucrative that movie companies have become loathe to give up the rights for games based on their properties to game companies. Instead, Disney and Warner Bros. have stepped up game production. Electronic Arts is also moving in the same direction, greenlighting media such as TV shows or comics based on its original game properties. Radar Group, a start-up that came out of stealth earlier this year, also wants to make games and movies based on the same properties simultaneously.

The path is fraught with peril. EA backed out of making games based on licensed properties because the results were boring gamers. And both movies and games are a hit or miss business. While the rewards of doing both are higher, so are the consequences of failure.

Brash Entertainment raised hundreds of millions of dollars to make games based on movies, but a number of the titles have fallen flat and it recently laid off some developers. Selvage (left) said he is aware of the risks and he believes that most games based on movies fail because they are made in too short a time and there isn’t enough cooperation with the movie studio.

Red Eagle games is planning to release its titles on all major platforms: the consoles, personal computers, handhelds and wireless devices.

The first Wheel of Time book debuted in 1990 and later titles have consistently appeared on The New York Times Bestseller list. The final book, being penned by writer Brandon Sanderson using notes and a partial draft by Jordan, will be published in the fall of 2009. The books are in 24 languages and there are tens of thousands of fan web sites.

Selvage, who formerly was general manager of IBM’s global media and entertainment businesses, said the project is more than five years in the making. Mondragon (left) spent 20 years in attorney roles at IBM. The company has identified key game developers for the launch and plans to hire staff in the coming months.

“We want to hire the rock stars,” Selvage said.