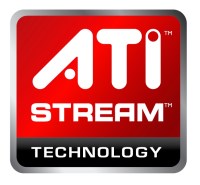 Just after taking a swing at Intel, Advanced Micro Devices is opening up another front in the battle with graphics chip rival Nvidia.

Today, Sunnyvale, Calif.-based AMD is announcing that it will release a new version of its ATI Stream technology, which is aimed at using a graphics chip’s processing capabilities to accelerate applications beyond just graphics.

With a new free release of its ATI Catalyst driver software (which enables a graphics card to work with a computer) on Dec. 10, AMD will essentially take on Nvidia’s own CUDA programming environment, which has a much stronger foothold in the market.

It may not be the most exciting development. But AMD needs to launch this technology to counter a growing advantage that Nvidia has been developing in the past couple of years by moving into Intel’s territory and making its graphics chips far more useful for everyday applications.

Graphics chips have a lot of processing power these days. A few years ago, Nvidia began promoting the idea of the general-purpose graphics processing unit, or GP-GPU. It would work in tandem with a microprocessor to speed up things that took too long to do on a central processing unit (CPU) alone. Nvidia launched a programming language, CUDA, to make it easy to create applications that run on the GP-GPU. Developers used that to create applications such as the Elemental Technologies’ Badaboom video conversion program, which can convert video from one form to another.

AMD will directly take on Badaboom, a third-party application that runs on Nvidia’s chips, by making its own Avivo Video Converter software available at no cost with the Catalyst driver. Avivo speeds the conversion of high-definition video files by 17 times compared to CPU-only conversion. A one-hour video that once took three hours to convert to run on a portable media player now takes only 12 minutes. Vendors taking advantage of the new ATI Stream software include ArcSoft, Adobe, Microsoft and Cyberlink.

The new Catalyst version 8.12 software works on the millions of graphics cards based on the new ATI Radeon HD 4000 series of graphics chips. AMD is also going to create its own programming environment to counter Nvidia’s CUDA language.

However, instead of using a proprietary language, AMD will create an open platform that will be based on industry standards. It will use a set of tools developed at Stanford dubbed Brook+ as well as a development platform dubbed OpenCL. Both of these, essentially, will allow developers to quickly create GP-GPU applications that run on AMD’s graphics chips.

Lastly, AMD said it would release a new workstation-oriented graphics board, the AMD Firestream 920, which is tuned for AMD Stream processing.