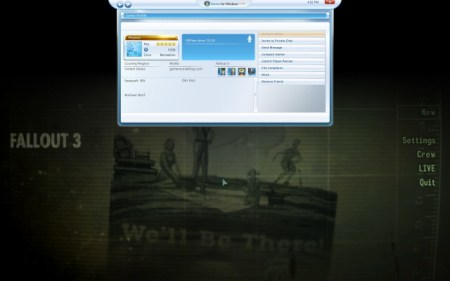 Microsoft is launching a new version of Games for Windows Live, the online gaming service for gamers who prefer to play on personal computers.

It’s the first major update since the service was introduced 18 months ago. This version has features such as a new user-interface that is accessible from inside a game, and a marketplace for both free and purchased game extras.

Eventually, the marketplace will be a way for users to buy new games via digital downloads, said Chris Early, general manager of Games for Windows Live at Microsoft. That means that Microsoft anticipates competing with Valve’s Steam game-downloading service. The marketplace feature will kick off in December with game extras and demos, but new game sales will come later.

The Live version on the PC is a counterpart to Microsoft’s Xbox Live online gaming service on the Xbox 360 console. It shows that Microsoft still has a vested interest in keeping the PC as a major gaming platform in spite of its heavy investment in the Xbox 360, said Early. Players can get access to their own gamertag, or single identity, and data like game achievements. They can also use the system for voice and text chat and finding other players to play in online multiplayer games.

In contrast to multiplayer play on Xbox Live (which requires a $50 a year subscription), the Games for Windows Live service is entirely free, including multiplayer play. Microsoft also said that there are a few more PC games coming under the Games For Windows brand, including Fallout 3, Grand Theft Auto IV and James Bond 007: Quantum of Solace.