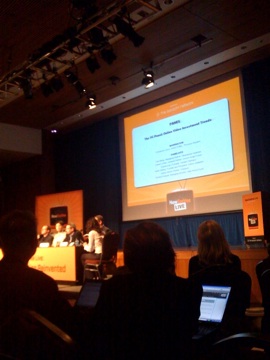 So, you have an online video start-up and you’re looking for funding. What’s the market like out there? The answer: Just fine, if you have a good business plan, a huge audience or a killer idea. Those obvious insights were shared by a group of venture capitalists at the NewTeeVee Live event today in San Francisco.

But there were some interesting points in the discussion, including some differing opinions among the VCs about whether the business model or having a huge audience is more important in picking a company to invest in. While most were on the business model side, Daniel Cohen of Gemini Israel Funds warned not to underestimate the power of a huge audience, saying he would not fund a company that doesn’t see significant usage.

Most of the VCs agreed that while old media is close-minded, it won’t be giving up its throne in terms of entertainment content anytime soon — but even that could happen eventually.

The interactivity aspect, trends like chatting over instant message while watching television shows, the panel found interesting, but they still worried about the ability to monetize such features. Shopping opportunities, like product tie-ins and one-click buying while watching a James Bond movie, for example, were interesting to the panel.

While there is no denying that the NBC and Fox-backed online video site Hulu has been a huge success, the VCs didn’t think it could have grown to what it is if it were VC backed (it took private equity, but not VC funding). The panel felt its entertainment connections were vital to making it into what it has become.

But, as Aydin Senkut of Felicis Ventures pointed out, Hulu also is a success because it has a good user experience.

Finally, moderator Constance Loizos of Thomson Reuters asked if a new big company will emerge in the industry over the next 10 years. All the VCs were in agreement that one would, but none thought that it would be one of the emerging companies now, like Hulu. Instead, more than one VC shared a story about a little startup working out of a garage to make an Internet search engine — that is of course, Google.

Senkut broke it down simply by telling the audience that if they creates something that provides value, they can be the next Google, the next Facebook. That drew a round of applause.

Find the rest of my live (paraphrased and mostly unedited) notes below:

I’m at the NewTeeVee Live event in San Francisco where a group of venture capitalists are talking about online video investment trends.

CL: Today we’re talking about the very tall order of making money off of online video. So what do you do if have an online video start-up and you want investments?

RW: People are more focused on monetization than traffic and eyeballs. And that’s good cause lots of users is exciting, but that’s not a business.

JS: We focus on three things: 1) The team 2) The market (both broad and sub-markets) 3) The business model. We want one that is scalable. Within video there are trends we find interesting such as professional video content coming on the web. That represents 95 to 98% of revenue for online video.

AS: I look at what the site do for its users. Looking for the next generation of trends right now.

WL: Capital efficiency aspect of a company. The cost of capital has increased significantly in the past 6 to 12 months. Also while video is very sexy, and the cost of entry is relatively low, but a good filter is to understand how large of an opportunity a project has. Can a company stand along on its own.

DC: I still think traction is the most important thing. I would not fund a company without significant usage. Business models are great, but it’s all about traction. (Chants of “fight, fight.”)

DB: Video is going to be huge, it is huge, we know that, but you want to dramatically drive down costs. Also professional content is key.

AS: I still am optimistic that video is one of the areas that hasn’t been affected by the current crisis. I also think you need to bet on the right trend and teams, not necessarily just looking at traction.

CL: The landscape has changed in the short-term, but not the long term. Exits will be tough for the next several months. But I’m much more interested in building an online video network, rather than just short videos. There are billions and billion of dollars already spent, mostly on broadcasts today, but that is for sure going to change. The dollars are going to go to IP delivered video, not broadcast video.

DC: I can’t see myself investing in the video content layer. I’m happy I invested in the technology around it. (Boos from the audience).

WL: At the end of the day, the monetization isn’t there. We want something that can hit a critical mass or scale.

CL: I wonder about dealing with the old media that is more closed-minded.

RW: As bad as the new music labels are doing, there hasn’t been a new music labels that’s come up and kicked their butt. I think in video there will be some cannibalism. ABC is doing it the right way. 10 years ago at Disney (he was there), that wouldn’t have happened.

With DVRs, it’s the shows you care more about, and less about the networks.

AS: I think combining web elements with video is important. For example, people want to chat with video. The new generation doesn’t want to watch TV passively.

CL: How big of a trend is chatting online while watching TV?

DB: The technical aspect is there. There are some viewing parties – and you can charge more on the advertising. But you still need to be able to monetize it in the first place.

WL: There’s a difference between who wants to comment on the show while watching, and those who want to comment with friends after they’ve watched it. There’s something out there for makers to extend their shows beyond the shows.

RW: Consumers are actually spending money to watch people live sleeping. So there is money out there.

WL: I’m vary wary of investing in the cable space, because of the structural aspects. They have strong survival instincts, but at the end of the day it is a closed system. It’s very hard for anyone, every collaboratively to push innovation forward.

I’m sure they’ll try, and have some success, but it’ll be measured in years rather than quarters.

CL: Talk a bit more about Hulu’s runaway success. What does it mean for VCs?

DC: I don’t think Hulu is something the VCs could have done. That had to be done by the media companies and not VCs.

WL: To be fair it was PE-backed, and they deserve a lot of credit. Opportunity exists, but you need a tight relationship with media companies.

DC: (question if he would have invested in YouTube) – Probably, no. No one knew it’s huge success would have happened.

DB: While Google became a cash machine, YouTube was a great exit for those who created it, but it’s not a cash machine. You need a huge capital base to get the CPMs up to where its a viable business. A lot of video companies will face that challenge.

DC: I originally regretted to invest in Metacafe, but now I don’t. YouTube is the exception.

JS: There’s a real opportunity to invest in Series A and Series B types of deals but in high quality companies. The money still exists, but the bar is higher.

AS: Hulu is successful because they focus on user experience. YouTube is because it made itself the main hub for videos. What about a company that would create videos automatically to use in videos? I would invest in that.

CL: Talking about valuations — how much should an entrepreneur be willing to give up of their company?

DB: I don’t think the percentages have changed significantly, but the amount of money has. You’ll definitely give up a minority stake still, but not more.

DC: I would hope our industry has learned that taking huge chunks of investment was stupid. I think A rounds will stay pretty much the same. But B and C rounds will be cheaper.

RW: Discounted notes suck, and now they’re going away after being hot a year and a half ago. Certain things on the seed level have changed.

JS: If there’s a change to make a lot of money, percentages don’t really matter.

AS: If there isn’t a demand your company there won’t be a good valuation.

DB: After the last bubble everyone was just happy to get funded, that may be the same as it will be now. But experimental capital is dried up, you need to show something that makes sense, that works.

CL: Does anyone think we’ll have a new brand a la Google

DC: Our business model is built on that hope, right? Every 10 years big brands come up. I don’t think it’ll be Hulu.

WL: I think there is a real opportunity for brand because consumer behavior is changing.

JS: The fear of not investing in Google is definitely out there. (He tells a story about Bessmer.) You don’t know which garage it’ll be in.

AS: Being in SV and not thinking that there will be another huge company is silly. Bet on the outliers, there will be one. (Funny story about people misspelling — which a huge opportunity for Google.)

Do something that provides value and you can be the next Google, the next Facebook.

What are other really exciting trends in video?

JS: (Talking about Qik.) There are billions of cellphones, rather than carry around a video, why not just use the phone? (Can’t say what Qik is looking to raise…)

DC: I think production is interesting. How do you create low-end tools? Also 3D is very interesting. (Talks about the company that did the CNN Election Night stuff.)

WL: There are exceptions, but we see so many ideas a year, so you want to set a filter. My personal filter is content because I can’t see how they become great businesses. But if they have great technology underlying it, then that’s different.

Are VCs willing to change their assumptions dealing with content companies?

DB: The bar has raised in proving you have something interesting and scalable.

JS: Businesses that own an audience or area of programming is a facet of a more compelling media business. Also companies that can operate at a very low-cost. And third, they have to have a business model that makes sense.