Twitterific, Twinkle, Twittelator. What do all of these share in common (besides ridiculous names)? They are all Twitter-based native applications that reside on my iPhone. Do I need all three? Actually, I don’t need any of them — at least not anymore. Why? Because I’ve finally found one I actually like: Tweetsville.

The problem with all of those other Twitter apps is that they failed to capture the spirit of Twitter. Twitter is a service that allows you to send 140 character messages to other people. At its core, that’s all it is. All of the previous Twitter apps were trying to do too much. Accordingly, most were ugly, some were cluttered and all were pretty slow.

But Tweetsville is different. It keeps it simple, and better yet, it does so while looking like it belongs on an iPhone. Usage is logical; clicking on a tweet (Twitter message) brings up a page for the user where you can easily send a reply, send a private message, toggle the message as a favorite or view a profile. It may sound obvious, but the other clients all made basic functions much more difficult than they needed to be. 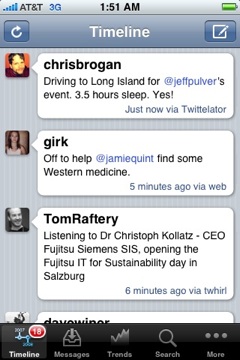 And it’s not like Tweetsville is lacking in other options either. There is an area devoted to hot trends on Twitter — that is, what words people are tweeting a lot. Clicking on a word shows you who is sending tweets about it most recently.

Tweetsville also has a robust search feature. Beyond basic word searches, going into the “Advanced” menu allows you to search for things like specific phrases, hashtags, places, dates and a wide range of other options. It’s actually more advanced than Twitter Search itself.

The only real critique I have is that Tweetsville should move the “@ Replies” area (to see who has publicly written a message to you) to the main bottom menu area. Right now, it resides in the “More” area.

And for those who use the other clients because they allow you to easily attach pictures to a tweet, Tweetsville allows for this too.

The interesting thing about Tweetsville is that it’s made by Tapulous — the same company that also makes Twinkle. It’s because Tweetsville started out as an independent project by developer Ed Voas before Tapulous took it under its wing, chief executive Bart Decrem tells TechCrunch.

One thing that may irk some users is that while Twinkle is free, Tweetsville costs $3.99. That may seem a bit high for an app that is just a Twitter client, but if you use Twitter a lot, believe me, it’s worth it.

You can find Tweetsville in the App Store here.

Update: As commenter RyanSylvestre notes below, you can actually change which button are in the menu bar by clicking on the “Edit” button in the “More” area. Brilliant.