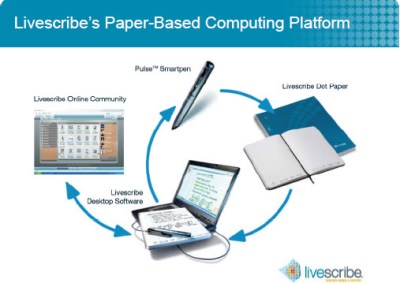 Livescribe, the maker of a smart pen with its own display and microprocessor, is launching a new version for the Apple Macintosh today, as well as new features for Windows users.

The Oakland, Calif.-based company makes the Pulse Smartpen, which has built-in technologies that make it much easier to take notes and record audio linked to those notes at the same time. The pen has a scanner that records every word written and it records audio at the same time. When you trace the pen over the words in a notebook, the software will play back the audio that was recorded as those words were written.

The company is pitching it to college students as a note-taking aid that ensures you never have to miss a word someone has spoken. Since the Mac is popular in colleges, Livescribe is releasing beta software today that lets the Pulse Smartpen work with a Mac. Users will be able to download the Livescribe Desktop Mac software from Livescribe’s site on Nov. 24. It will work with Intel-based Macs with Mac OS X 10.5. One new feature on the Mac version is the ability to export handwritten notes as Adobe PDF files.

There are also two major new features for Windows users. Normally, users have to buy a special paper that has a grid of dots to help the pen position itself accurately on a page. Users had to order this special paper or find it in stores. Now they’ll be able to print their own on a laser printer. 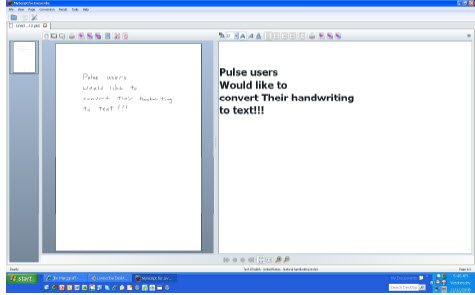 The company also says a new third-party application will enable the automatic transcription of handwriting into computer text. MyScript for Livescribe was created by partnering firm Vision Objects to save note takers the trouble of typing in their notes. Byron Connell, chief marketing officer at Livescribe, says you have to have somewhat good handwriting, though. The transcription software can be downloaded starting Nov. 24 as a free 30-day trial or purchased for $29.95 (one-time fee) at www.visionobjects.com/store. Users can make edits to the converted text to fix errors and they can also create a personal dictionary of frequently used words to ensure a more accurate conversion. Text can be copied into a variety of applications, including Microsoft Word and Outlook.

Connell, said the pen has been selling well since its debut in April 2008, although he declined to give numbers. He said the company’s own survey of 2,000 users showed that more than 90 percent have shown it off to friends and feedback is overwhelmingly positive. More than 2,300 developers have signed up and downloaded the company’s application-development software. In the first quarter, Connell said Livescribe will launch an application store online.

Past scanner pens have been bulky and often don’t come with software that makes the scanned text or handwirting useful. By tying the scanned text to audio playback, Livescribe has done something no one else has in the college market (see below for other competition in middle school). The binaural audio, with two microphones, is good enough to distinguish a professor’s voice in a large lecture hall; it can also accurately record voices in a noisy environment.

The Pulse Smartpen sells for $149 with 1 gigabyte of storage that can hold 100 hours of recorded audio. The 2-gigabyte version sells for $199. It’s available in Target stores, Costco, and more than 100 campus bookstores. It’s also online at Amazon.com and Livescribe.com. Livescribe was founded in January 2007 by Jim Marggraff, who licensed the technology for the digital pen and paper technology from Anoto Group AB. Anoto has also licensed the technology to Leapfrog Enterprises, which made a kids smart pen, the Fly Fusion Pentop computer. Leapfrog launched it last year; it has reported specifically on Fly Fusion Pentop sales, but Leapfrog did recently swing to a profit on strong product sales.

The company has raised more than $30 million in venture funding from backers including VantagePoint Venture Partners and Gerlach & Co.